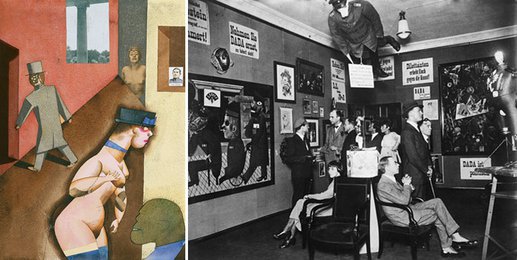 The Dada movement emerged in Zurich in neutral Switzerland in 1916, fuelled by the philosophical and political despair experienced by artists and poets during World War I. Initially centred around the Cabaret Voltaire, Dada brought together Tristan Tzara, Richard Huelsenbeck, Emmy Hennings, Hugo Ball and others to protest against what they perceived as the irrational and senseless elements of European culture. Violent, infantile and chaotic, Dada took its name from the French word for a child’s hobbyhorse or possibly from the sound of a baby’s babble. Its activities included poetry readings and avant-garde performances, as well as creating new forms of abstract art that subverted all existing conventions in Western art.

The impact of the Dada movement was felt throughout Europe – and most powerfully in Germany – from 1917 to 1921. Christian Schad’s participation in the Zurich Dada group resulted in the creation of a unique series of photograms, or camera-less photographs, together with abstract wood reliefs. In Cologne, a branch of Dada emerged through the work of Max Ernst, who produced intricate collages and staged highly provocative anti-art exhibitions. Kurt Schwitters in Hanover developed Dada-inspired works, called 'Merz’ collages, through which he invented a completely new way of making art, composed from found objects taken from modern city life. Berlin Dada, which formed in 1917, took on a decidedly political tone. Though the Dada movement in Germany was very short-lived, it has profoundly influenced subsequent developments in avant-garde art and culture.