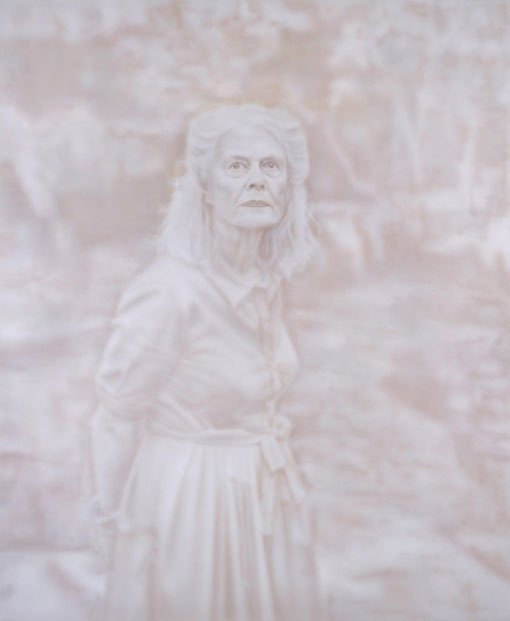 Fiona Lowry first saw architect Penelope Seidler about six years ago at a gallery opening. ‘I was really struck by her beauty and her presence and asked someone who she was. I decided then that I would like to paint her,’ says Lowry.

‘It is important to me when I am making a work that I take the subject to a place that has memory and history attached to it because I am interested in exploring the subject’s interaction with that landscape. We went to Penelope’s iconic house in Killara, which she designed with her late husband Harry Seidler in the 1960s. It’s an incredible space architecturally but it is also loaded with history and memories of life very well lived. We spent some time in the bush at the back of the property looking at the waterfall. At one point, Penelope looked back at the house towering over us and reflected that it had been some time since she had seen it from this angle. It was that reflection that I wanted to explore with this portrait.’

Born in Sydney in 1974, Lowry makes her paintings using an airbrush and a limited palette of soft, pastel colours. She won the 2008 Doug Moran National Portrait Prize. This is her third time in the Archibald Prize. Last year she was highly commended and was a finalist in both the Wynne and Sulman prizes. This year she is also a Sulman finalist.

'On behalf of ANZ, I congratulate Fiona Lowry as a worthy winner of the 2014 Archibald Prize,’ said David Gonski, Chairman, ANZ. 'Fiona’s work along with all this year’s finalists show the rich diversity of Australia’s artistic talent and I encourage everyone to take the opportunity to view the works as they make their way around regional Australia.’

The Archibald and Wynne Prizes were judged by the Trustees of the Art Gallery of New South Wales. The judge for the Sulman Prize was Jenny Watson.

The Archibald, Wynne and Sulman Prizes are major art prizes run by the Art Gallery of New South Wales.

The Archibald Prize is a portrait painting prize, with $75,000 going to the winning artist. It is Australia’s oldest art award and entries must be painted in the past year, from at least one live sitting with the artist. The $35,000 Wynne Prize is awarded to the best landscape painting of Australian scenery or figure sculpture, while the $30,000 Sulman Prize is given to the best subject painting, genre painting or mural project in oil, acrylic, watercolour or mixed media. The winners of the Trustees’ Watercolour Prize and the John & Elizabeth Newham Pring Memorial Prize (both part of the Wynne Prize) receive $2000 and $250 respectively.

At Art After Hours this Wednesday 23 July, join us for a special celebrity event at 6.30pm when ABC Classic FM presenter Margaret Throsby will interview Fiona Lowry, the 2014 Archibald Prize winner.