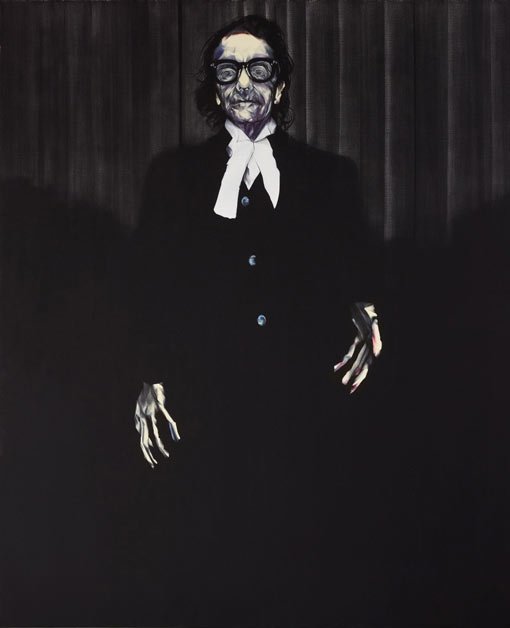 Sydney barrister Charles Waterstreet is the subject of Nigel Milsom’s winning portrait in the 2015 Archibald Prize.

Milsom’s canvas – the largest painting of the 47 finalists in this year’s prize – presents Waterstreet as a larger-than-life figure.

As well as winning the prize, Milsom is a subject this year – as the sitter for his friend, fellow artist Matthew Kentmann.

Describing Waterstreet as “a very complex person”, Milsom said his portrait was “an attempt to depict him as a giant: part-man part-mythical creature, with hands that appear otherworldly”.

Their relationship formalised several years ago, when Charles Waterstreet represented Nigel Milsom as his barrister.

“My relationship with Charlie obviously took on more significance at that time,” Milsom said.

“Charlie restored my faith in the legal system,” Milsom said. “He is a very complex person… he isn’t just a law man. He’s a writer, a social environmentalist and does things in film, photography and theatre too. Despite his busy life, he has managed to dedicate most of his time to the welfare of others.”

The Archibald Prize is judged by the Art Gallery of New South Wales board of trustees. President Guido Belgiorno-Nettis congratulated Nigel Milsom on winning the 2015 Archibald Prize.

“It’s a magnificent painting. It’s powerful; it’s commanding and we’re proud to have it in this year’s exhibition.”

“For 94 years, these portraits have been telling new stories and imparting fresh perspectives. The Archibald Prize chronicles the changing face of Australia and is a vibrant visual snapshot of time and place.”

The Archibald, Wynne and Sulman Prizes enjoy the support of principal sponsor ANZ.

“The Archibald is Australia’s most popular art prize and it demonstrates the incredible depth and diversity of artistic talent from across the country,” ANZ Chairman David Gonski said.

“On behalf of ANZ, I congratulate Nigel Milsom on winning the 2015 Archibald Prize. There were many exceptional entries. I urge everyone to take the time over the coming months to experience the exhibition during its tour of New South Wales and Victoria,” he said.

The runner up for the Archibald Prize is Sydney artist Mitch Cairns for his portrait of renowned Australian artist Peter Powditch.
View Cairns’ work

The winner of the Sulman Prize is Sydney artist Jason Phu for his work I was at yum cha when in rolled the three severed heads of Buddha: Fear, Malice and Death.
View Phu’s work

The winner of the John and Elizabeth Newham Pring Memorial Prize is Sydney artist Viola Dominello for her landscape On the river.
View Dominello’s work

The Archibald, Wynne and Sulman Prizes are major art awards run by the Art Gallery of New South Wales. A portrait prize, the Archibald carries $100,000 prize money for the winning artist. Entries must be painted in the past year, from at least one live sitting with the artist. The $50,000 Wynne Prize is awarded to the best landscape painting of Australian scenery or figurative sculpture, while the $40,000 Sulman Prize is given to the best subject painting, genre painting or mural project in oil, acrylic, watercolour or mixed media. In 2015, finalists in all three prizes will be exhibited at the Art Gallery of New South Wales between 18 July and 27 September. Archibald Prize finalists will then go on a regional tour until July 2016.