Winner of the Packing Room Prize 2017 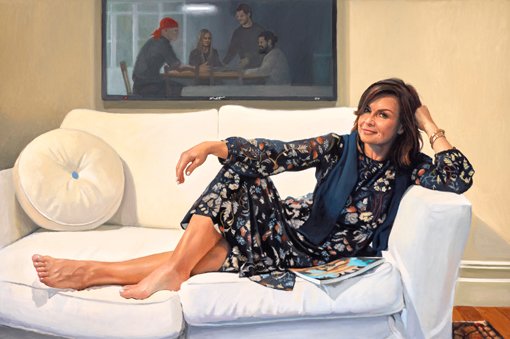 For 26 years Art Gallery of New South Wales head packer Steve Peters, with 51% of the vote, has maintained that the Packing Room Prize should be awarded to a portrait “that’s good and looks just like the sitter”.

In 2017, his final year judging the prize, Peters announced a portrait of journalist and television personality Lisa Wilkinson AM, by Central Coast artist Peter Smeeth, as the winner of the Packing Room Prize.

“I looked at the painting and thought, that’s a great likeness. It’s how Lisa looks every morning on the telly. She looks like she’s laughing at something Karl said!” Peters said.

“Mind you, Lisa’s been in the wars recently, so I reckon the safest place for her to stay for a while is right on that couch – just like me in my comfy chair in my portrait by Lucy Culliton. That’s where I intend to spend lots of time too in the coming weeks,” Peters added.

Artist Peter Smeeth is a regular entrant to the Archibald Prize, having entered the prize for the past 34 years – almost as long as Peters has been awarding the prize. An Archibald finalist three times, Smeeth also won the Sulman Prize in 2011.

“I’ve always said g’day to Peter when he’s delivered his works to the Gallery. There should be more artists like him in the world,” Peters said.

Hearing he’d won the Packing Room Prize was a bittersweet moment for the artist. In his acceptance speech Smeeth said, “I so wanted to be at the Gallery to enjoy the fun. As fate would have it, my best friend’s funeral is also at 11am today, so I will be in Yass delivering the Eulogy. But I’d like to acknowledge Lisa’s contribution and sincerely thank her for agreeing to sit and for being such a good sport and a great subject,” Smeeth said.

“I thought I had a chance to win the Packing Room Prize with Fitzy – Peter FitzSimons – in 2010 but Steve went a bit arty that year and gave it to Nafisa Naomi’s portrait of Glen A Baker. Now, just as he seems to be getting better at judging, Steve is giving the game away!” Smeeth added.

Wilkson said she was thrilled that Smeeth had won the Packing Room Prize, and humbled that she was the subject of his work.

“I love the Art Gallery of New South Wales, adore the Archibald and as a big fan of portraiture I was taken with Peter’s portrayal. He got me.

“A particular thank you to head packer, Steve Peters, who picked this portrait, and who, I am told, is retiring after 40 years on the job. Go well,” Wilkinson said.

The Packing Room Prize – a cash prize of $1500 – is awarded to the best entry in the Archibald Prize as judged by the gallery staff who receive, unpack and hang the entries. In 2018 the Packing Room Prize mantle will be handed to installation officer Brett Cuthbertson who replaces Peters as head packer.

The Archibald, Wynne and Sulman Prizes, the Young Archie competition and the Archibald Prize regional tour are all generously sponsored by ANZ.

“Over the last 26 years we’ve seen the Packing Room Prize gain popularity, becoming highly contested among artists. At ANZ we are proud of our long history supporting the arts community in New South Wales and we congratulate Peter Smeeth on being awarded this year’s Packing Room Prize,” Mr Ohlsson said.