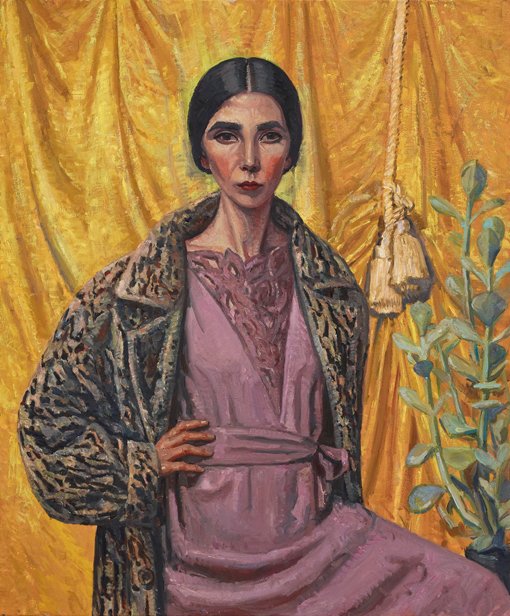 “His style was academic, yet he supported the avant-garde in Australia and painted portraits of his artistic contemporaries Thea Proctor and Hera Roberts – both independent, self-possessed style-makers at a time of burgeoning female empowerment,” Coppersmith said.

Over the past 21 years, Coppersmith has experimented widely with style and subject matter but she keeps returning to the self-portrait which she says allows her to work from life, with intense absorption in the painting process.

Of her win, Coppersmith said, “Hearing of the win this morning my mind was scrambling to integrate the surreal news about something that’s been 20 years in the making. I’m still trying to fathom it!”

Art Gallery of New South Wales curator of Australian art Anne Ryan said the work is an uncompromising portrait of Coppersmith as a woman and as an artist.

“Coppersmith is a modern woman asserting her place in the venerable tradition of Australian portraiture, exemplified by Lambert,” Ryan said.

Coppersmith is only the tenth female artist to win the Archibald Prize (with 12 winning portraits among them – Judy Cassab and Del Kathryn Barton have won twice).

Art Gallery of NSW director Michael Brand said while there are almost double the number of self-portraits in the Archibald Prize this year than in recent years, winning self-portraits are a rare choice of the Board of Trustees who award the prize.

“Yvette is a highly talented young artist who brings a deep and historical understanding of the tradition of contemporary art practice. Her previous paintings as a finalist have been diverse and shown clearly her talent as an artist,” Brand said.

In awarding the 2018 winners of the Archibald, Wynne and Sulman Prizes, Board president David Gonski said the judges spent a lot of time discussing the excellent entries.

“The Trustees were very complimentary of all the artists’ works which were hung. After much discussion, the decisions were unanimous,” Gonski said.

“To win the Archibald Prize is an outstanding achievement, and we congratulate Yvette,” Ohlsson said.

“The Archibald Prize is one of Australia’s most prestigious art awards, a widely loved and highly regarded competition that spans all ages and cultures and brings art to the people.

“It is unique in its celebration of artists and their subjects from all walks of life. ANZ is proud to be associated with this iconic exhibition for the ninth consecutive year,” Ohlsson added.

About Untitled Napangati says, “This painting is associated with Yunala, a rock hole and soakage water site among sandhills west of Kiwirrkura in Western Australia. During ancestral times a group of women camped at this site. While at Yunala, the women camped beside the rock hole, digging for the edible roots of the bush banana or silky pear vine (Marsdenia australis), also known as yunala.”

“The lines in the work represent both the sandhills surrounding the site as well as the yunala tubers underground. The women later continued their travels east, passing through Marrapinti, Ngaminya and Wirrulnga on their way to Wilkinkarra,” Napangati added.

Kaylene Whiskey is the winner of the 2018 Sir John Sulman Prize.

Of her work she says, “This is my painting about two strong kungkas (women). Cher is singing a song on the microphone; she is having a great time because her boots have silver spurs and are really tall above her knees.

“Dolly Parton is wearing the pink overalls with pockets. Dolly has been skateboarding at the shops. She must have bought that Christmas present for Cher because they are good friends, they like to sing together! Kaylene TV is playing some good songs like Rage, and there is a big mingkulpa (local native tobacco) plant growing underneath the good boomerangs.”

Further results of the 2018 Archibald, Wynne and Sulman Prizes

The Trustees of the Art Gallery of New South Wales have awarded the inaugural Roberts Family Aboriginal and Torres Strait Islander Prize to Wawiriya Burton for Ngayuku ngura (my country).