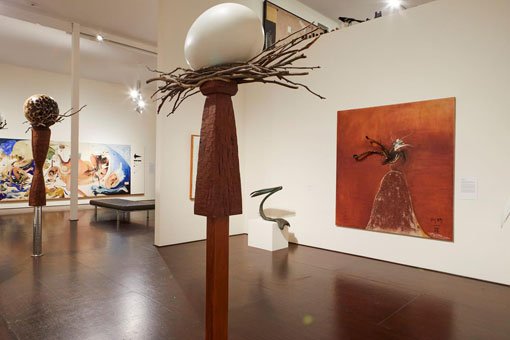 The Art Gallery of New South Wales and the Brett Whiteley Studio are delighted to announce that applications are now open for the prestigious, national painting scholarship.

Instead, the Brett Whiteley Travelling Art Scholarship will be awarded to a total of five young artists who will each be offered a two-week residency, from Monday 16 November to Sunday 29 November 2020, at the Shark Island Institute Kangaroo Valley, in regional New South Wales. Each of the five artists will also receive $10,000.

During the residency, the artists will be offered a mentoring session by Ben Quilty, a former recipient of the Brett Whiteley Travelling Art Scholarship, as well as visits by other prominent arts figures in the industry.

“The Gallery is enormously grateful for the support of the Shark Island Institute. The residency will be a unique and valuable experience for young artists,” Brand said.

“I also thank the Brett Whiteley Foundation for extending the scholarship this year from one to five artists who will each receive $10,000. During COVID-19 the Gallery has endeavoured to provide as many opportunities as possible for artists to be paid to continue to create and perform work, and this opportunity continues this support,” Brand added.

Artists can submit works online from Wednesday 8 July until Friday 31 July, after which time they will be judged by a guest artist judge. The five recipients of the scholarship will be announced on Wednesday 14 October 2020.

Wendy Whiteley will curate an intimate exhibition of their works at the Brett Whiteley Studio.

About the Brett Whiteley Studio
Brett and Wendy Whiteley first bought the former Surry Hills warehouse in 1985, converting it into a studio and exhibition space where Brett lived and worked from 1988 until his death in 1992. The space opened to the public in 1995, two years after it was purchased by the NSW Government.

The Brett Whiteley Studio offers visitors the unique opportunity to experience the atmosphere of the artist’s working space, with paintings, art materials, Whiteley’s collection of art books and objects that inspired him, alongside the graffiti wall covered with his quotes and images.

The Studio is managed and owned by the Art Gallery of NSW. Free admission is made possible by J.P. Morgan, principal sponsor of the Brett Whiteley Studio.