The future is already here – it’s just not evenly distributed 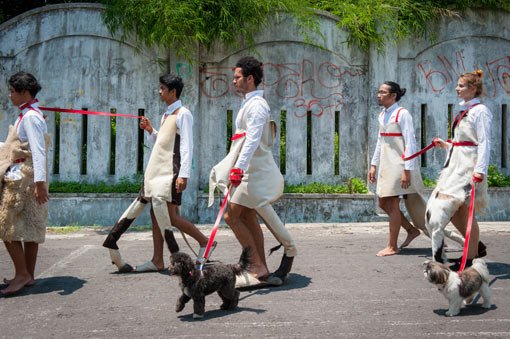 This Friday the Art Gallery of New South Wales continues its 40-year relationship with the Biennale of Sydney as a major venue for the 20th Biennale program titled The future is already here — it’s just not evenly distributed. Artistic Director of the 20th Biennale of Sydney Stephanie Rosenthal has assigned each of the exhibition’s major venues a role as an “embassy of thought”.

“Artists exhibiting at the Art Gallery of New South Wales’s Embassy of Spirits explore the intersection between the spiritual and the philosophical, including works concerned with personal and religious rituals,” Rosenthal said.

“I welcome our esteemed artists from across Australia and around the globe to our Embassy of Spirits where their work provokes thought about our belief systems and rituals through the language of art,” Brand said.

Visitors will be drawn into the Embassy of Spirits by Sheila Hicks’ colourful, fibre-based transformation of the nineteenth-century facade of the Art Gallery of New South Wales. Inside the exhibition the spiritual is explored through the filmic works of Christoph Schlingensief, Sudarshan Shetty and Jumana Manna; alongside the paintings of Rodel Tapaya and the sculptures of Nyapanyapa Yunupingu.

The promenading of Mella Jaarsma’s Dogwalk (2016) and the month-long chain performance ghost telephone curated by Adrian Heathfield, along with Dane Mitchell’s sculptural works using homeopathic remedies and Yin-Ju Chen’s map-like drawings based on horary astrology, are also program highlights at the Embassy of Spirits.

The 20th Biennale of Sydney’s Embassy of Spirits encourages consideration of the Biennale program in conversation with the Art Gallery of New South Wales’s rich historical and contemporary collections.