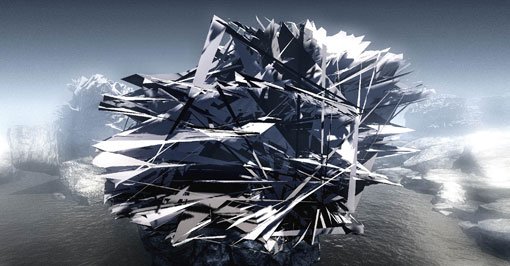 David Haines and Joyce Hinterding, The outlands 2011, production still. Courtesy of the artists and BREENSPACE, Sydney

“Where to?” From a plane trip half-way round the globe, to a poetic walk through suburban backstreets, to a virtual voyage through a digitally constructed world, the 2011 Anne Landa Award offers a series of ‘unguided tours’ through some rich imaginative territory. Using video, computer animation, kinetic sculpture and even an immersive game environment, the seven contemporary artists in the 2011 award explore the lure of other places, the anxieties and pleasures of travel, and the unexpected rewards of getting lost.

The Anne Landa Award was the first acquisitive award in Australia to focus on moving image practices and the application of new technologies to contemporary art. Established in honour of Anne Landa, a former trustee of the gallery who embraced challenging art and ideas, the award is a vital platform for presenting and supporting dynamic, exploratory work that is exemplary in this area. Unguided tours is the fourth in the biennial exhibition series and for the first time both Australian and international participating artists are eligible for the acquisitive award of $25,000.

Between them the artists cover a huge and varied territory, with Charlie Sofo wandering and wondering in the suburbs of Melbourne, Rachel Khedoori quietly entering the depths of the Australian bush, Ian Burns exploring the landscape of American cinema, and Jae Hoon Lee climbing the steps of a temple in India. Meanwhile Arlo Mountford brings to digital life the moment of departure (or is it arrival?) portrayed in two famous paintings by Watteau, and David Haines and Joyce Hinterding invite viewers to take the controls and choose their own path through the forests and deserts of a stark and strange digital environment. Along the way, they reflect on everything from road movies to tourism to the precariousness of the planet.

No matter how far-flung the locations and how varied the concerns, what these artists all share is a spirit of open-ended curiosity – a belief that art picks up where the guidebooks leave off. In their different ways, they all assert that imaginative travel is at least as important as the physical kind.

THE ARTISTS AND THEIR WORKS

David Haines (b1966, London, UK; resides Blue Mountains, Australia) and Joyce Hinterding (b1958, Melbourne, Australia; resides Blue Mountains, Australia) invite gallery-goers to pick up the controls and conduct their own voyage through an immersive, two-screen videogame environment. Unlike most ‘first-person shooters’, this game rewards curiosity and open-ended movement, unfolding through a haunting monochrome landscape of forests, buildings and deserts that recall the contemporary Middle East.

Rachel Khedoori (b1964, Sydney, Australia; resides Los Angeles, USA) turns a slow-moving view of Australian bush into a mesmerising mirror world. Combining a film projection with a sleek mirrored surface, Khedoori creates a Rorschach-like double landscape that endlessly peels away from itself. The resulting installation plunges viewers into a shadowy world that is familiar and strange, solid and fluid, densely detailed yet impossible to fully grasp.

Jae Hoon Lee (b1973, Seoul, Korea; resides Auckland, NZ) makes travel photographs with a twist, harvesting hundreds of images in remote locations like Nepal and then digitally combining and altering them. Like the Asian scroll paintings they often resemble, Lee’s photographs evoke journeys that unfold in time through landscapes of dizzying and sometimes threatening immensity.

Arlo Mountford (b1978, Honiton, UK; resides Melbourne, Australia) updates one of Western art’s most famous riddles, using computer animation to give life to Jean-Antoine Watteau’s famous paintings of lovers arriving on or departing from a mythical island called Cythera. Adding motion to the scenes, Mountford poses afresh the question that viewers have long asked: Has the journey just begun, or just ended? Is this a scene of joy or lament?

Charlie Sofo (b1983, Melbourne; resides Melbourne, Australia) goes walking in neighbourhoods near at hand, looking for the extraordinary in the ordinary. Paying attention to places that are usually glimpsed from the passenger window, Sofo’s videos propose a fresh way of understanding the landscape of the city – not in a car and in a rush, but on foot and on the lookout for small discoveries and lyrical connections.