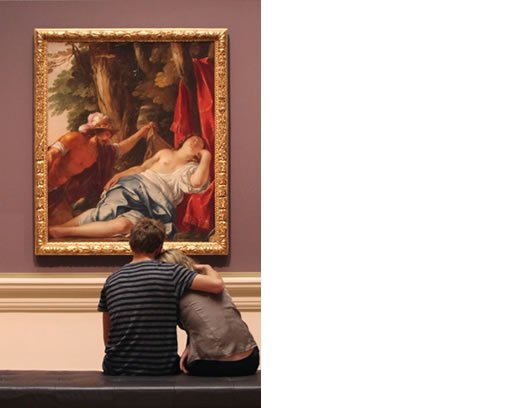 Jacques Blanchard Mars and the vestal virgin 1638 oil on canvas 130 × 110.4 cm, purchased with funds resulting from a gift by James Fairfax AO and with the support of the Art Gallery Society of NSW 2007

Since 1953 the art lovers of New South Wales have supported the Art Gallery of NSW by joining its Society – the most successful organisation of its kind in Australia. With Chief Justice Sir Kenneth Street as its first president, the Art Gallery Society of NSW has always attracted the good, the great and the notorious – among them impresario and publicity agent Harry M Miller, philanthropist Ann Lewis, Lady Florence Packer, artist Margaret Olley, politician Bronwyn Bishop, architect Harry Seidler and his wife Penelope.

A new book on the organisation gives a fascinating perspective on Sydney’s social history and on the development of the Gallery under former directors Hal Missingham and Edmund Capon. The future Prime Minister who came to party, leadership contest fought out on the streets of the Eastern suburbs, the financial advisor who went to jail – these stories and more are told in frank detail.

In 60 years the Society has grown from a small, elite club, renowned for its outrageous balls and controversial personalities, into a broad-based organisation of more than 31,000 with an unrivalled program of activities. Viewings, lectures, events and the monthly magazine Look all help to engage members with the Gallery and make it the most active friends’ group in Australia. For many, it is their second home.

More than 200 works of art, conservatively valued at some $25 million, have been bought for the Gallery with funds raised by members. The Society has given rise to bodies of volunteers who provide incomparable services to the institution and to its visitors. And the Society’s corporate program regularly brings staff and clients of 200 leading companies into the Gallery.

To celebrate its 60th anniversary, the Society is publishing a lavishly-illustrated book, Art lovers: the story of the Art Gallery Society of New South Wales 1953-2013. Written by former executive director and Oxford history graduate Judith White, it draws on extensive documentation and on interviews with dozens of participants to tell the story of one of the state’s most enduring membership organisations. It will be launched on Saturday 27 July by the Governor of New South Wales, Professor Marie Bashir AC at a special gala dinner.

The Gallery’s exhibition Sydney moderns is supported by the Art Gallery Society as part of its anniversary celebrations.

See the Gallery website for more information about 60th anniversary events and membership.