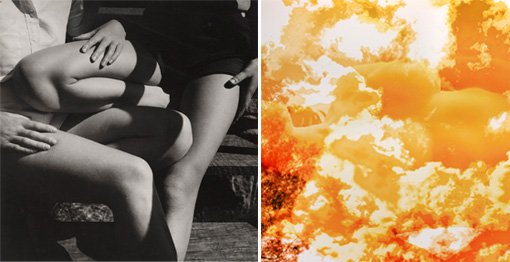 A focus on photography at the Art Gallery of New South Wales continues with two collection-based exhibitions opening in the latter half of the year.

A solo installation by renowned Australian artist Rosemary Laing is now open at the Gallery as the latest instalment on the recently refreshed modern and contemporary floor. Following Rosemary Laing: transportation is an exhibition entitled Body parts, which opens on 26 September 2015.

Rosemary Laing: transportation brings to the fore two groups of photographs from the Gallery’s collection: the 1995 series greenwork, which the Gallery holds in its entirety, and the 1996-97 series brownwork. These bodies of work highlight the nature of place and landscape, and the complex relationship between technology, labour, time and speed.

Body parts features a selection of works by Australian and international artists that focus on photography’s ability to communicate the extent of the body both physically and metaphorically. Individually, the photographs present fragmented perspectives of the body. As a group, they come together in a riot of movement and stillness, luxury and abjection. Artists include David Bailey, Robert Besanko, Jane Burton, Max Dupain, Tracey Moffatt and William Yang.

The Gallery’s senior curator, photographs, Judy Annear, said the two exhibitions illuminate the strength and diversity of the Gallery’s photographic collection, feeding into the broader ethos of the recently renewed spaces of the modern and contemporary floor.

“From the work of Rosemary Laing, who uses the camera to interrogate our understanding of the Australian landscape and places of transport, to a selection of photographs examining how the body can be subjected to, or participate in, an infinite number of photographic transformations, these exhibitions remind us of the complex yet always relevant role of photography in culture and society,” Annear said.

“The aim of the photography gallery is to expand our understanding of the ever-changing medium of photography, the most pervasive of the 21st century and which, from its birth in the 19th century, changed the course of art forever,” Annear said.

A highlight of the photography program is Rosemary Laing’s public talk about her work on Wednesday 9 September 2015.

The major photographic exhibition Julia Margaret Cameron: from the Victoria and Albert Museum, London will also be showing at the Art Gallery of NSW from 14 August to 25 October 2015.

Body parts features over 20 works by Australian and international artists that accentuate photography’s ability to communicate the body both physically and metaphorically. The selected photographs span from the 1930s until today, with the majority of works from the 1970s – a decade when the photographic field was dramatically expanded through historical, theoretical, aesthetic and political enquiry.

Drawn from the Gallery’s collection, the photographs encompass four overlapping themes: the performative and fertile body; the body in extremis; the classical body; and the abject body. Individually, the works present fragmented perspectives of the body. As a collective, they come together in a riot of movement and stillness, luxury and abjection.

In the 19th century, photography as a new medium concentrated on precise delineations of face and figure. Technological advances, including faster processes, along with the influence of cinema, the rise of magazine culture, and broadening interpretations of photography and the photograph, allowed for greater experimentation in the 20th century.

This sense of enjoyment can be traced though other photographs in the exhibition, including those by Douglas Holleley, David Bailey, Ralph Gibson and Lynn Davis. Davis, in her approach to photographing the body, asks her subjects to push the body beyond its limits so that the elements of beauty and excitement can be exaggerated.

Counter to these works are those by William Yang, Jane Burton and Ronnie van Hout, who express an anxiety through their depictions of the depersonalised body and its fragments. In Van Hout’s Self titled 1995, a severed and scarred finger is seen lying in a blasted landscape, a metaphor for the artist, dismembered and discarded.

Rosemary Laing: transportation brings to the fore two groups of photographs by this renowned Australian artist from the Gallery’s collection: the 1995 series greenwork, which the Gallery holds in its entirety, and the 1996-97 series brownwork. These bodies of work highlight the nature of place and landscape, and the complex relationship between technology, labour, time and speed.

In greenwork, two photographic motifs are placed in dialogue with one another. Digitally enhanced hyper-real landscape panoramas sit alongside a sequence of time-lapse photographs of aeroplanes taking off from the tarmac. The panoramas of expansive horizonless canopies are borrowed scenes, derived from black and white photographs by Peter Elliston. Saturated in lurid green and blue hues and printed at low resolution on vinyl, akin to roadside billboards, the photographs are estranged from any sense of the real or the natural. They are pixelated, with compositions that are stretched and warped as if disfigured by a glitch in a rapid cinematic panning shot.

The distortions that interrupt these works become portraits of acceleration but also fracture the formal nature of photography itself by introducing a rupture in an ordinarily seamless image surface. The blurred aeroplanes in the time-lapse photographs perform a similar function. These indistinct shapes are figures in motion that open up the still images to elongated and expansive temporal rhythms.

Laing returned to the airport to produce brownwork. Sites of passage and transmission, airports can be passed through but not inhabited. Photographing the structures that facilitate this movement, including empty airfreight containers and cargo in transit, Laing examines the industrial and in-between spaces where flight and travel are performed. She gives visibility to the mechanisms that make flight possible yet are often obscured by the veneer of technological efficiency. In doing so, she draws attention to the way that, through travel, we can transcend and manoeuvre the boundaries of time and space. For the long-distance traveller, far flung destinations become adjacent neighbours and time folds back on itself.

As Laing herself stated in studio notes from 1995-96, these series examine how technologies of transmission confront us ‘not with a memory of presence, but with the experience of never being present, never static, always rather the intensity of velocity and transmission, and being at best in-between’.

More information on programs related to the exhibition