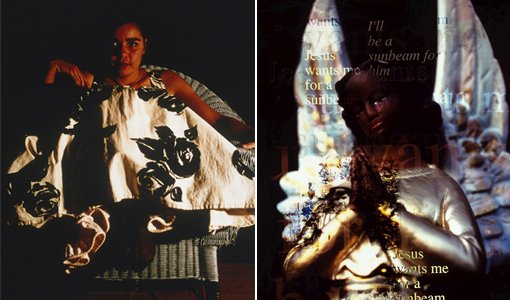 Brenda L Croft Strange fruit 1994, Cibachrome photograph, purchased with funds provided by the Young Friends of the Art Gallery Society of New South Wales 1994, and Jesus wants me for a sunbeam 1998, colour Ilfachrome photograph, gift of the artist 2007

By placing myself behind the camera I am taking control of my self-image and images of ourselves. I cannot, do not, take sole responsibility but challenge and attempt to reverse the expected. Brenda L Croft

Brenda L Croft is a Gurindji/Malngin/Mudpurra artist, curator and academic. Born in Perth in 1964, and having lived in many parts of Australia and overseas, she now lives and works on the South Coast of NSW. The 21 works in this exhibition are from the Gallery’s collection and are drawn from four major series by Croft.

The big deal is Black
Croft works closely with her family, friends and Indigenous community members to create her images. The works Mary Mumbulla and Murri Craigie and Thea, Tyson and Hetti Perkins are drawn from the series The big deal is Black 1993. First exhibited in 1993, this series focuses on the strong matrilineal connections within Aboriginal families and allows the viewer an intimate insight into family life. The works mainly depict Sydney-based Aboriginal women in their roles as mothers, daughters, sisters, cousins and grandmothers. In their familiar surroundings and at ease in front of the camera, Croft’s subjects provide a realistic portrayal of contemporary Aboriginal life.

This approach is in direct contrast to the studio and documentary photographs taken of Aboriginal people in the 19th century which are dominated by staged scenes presenting a false image of Aboriginal life.

Croft began working on the series In My Father’s House during a residency in New York in 1996–97 and later at the Western Australian Academy of Performing Arts (WAAPA), Edith Cowan University in 1998, exhibiting the work at the Australian Centre for Photography in 1998. In this series, Croft juxtaposes religious imagery, language and family photos to comment on her experience of growing up in the suburbs with a white mother and an Aboriginal father who was taken from his family at less than two years of age under the government policy that allowed the removal of Aboriginal children from their parents.

Strange fruit
Strange fruit was first exhibited in 1994. The title, Strange fruit, is partly drawn from the Billie Holiday song about the racial atrocities that occurred in the deep south of America. In the initial installation, the images were intimate in scale and displayed in conjunction with native and introduced species of fruit and flowers that rotted during the exhibition, while a looped sound-piece comprising the overlaid voices of the women depicted, continuously played.

The work refers to the classification and preconceptions of who is actually of Aboriginal heritage and what an Aboriginal person is supposed to look like in contemporary Australian society.

Conference call
These images were originally part of a collaborative installation work, titled Conference call, made with renowned African-American conceptual artist Adrian Piper, for The boundary rider: 9th Biennale of Sydney, Art Gallery of NSW, 1992. In the Biennale, the images were displayed in a darkened room furnished with office chairs where people were encouraged to sit and answer incessantly ringing telephones. On the phones, listeners heard someone talking in an unidentified Aboriginal language followed by a translation in English.

Croft took these photos at key sites around Redfern and presents images of Aboriginal people, with a diversity of experiences and backgrounds, standing proudly within their urban environment. Contrary to the usual media depictions of Redfern’s Aboriginal community, Croft presents a positive image from an insider’s viewpoint. Included in these images are significant individuals who have worked tirelessly for their people, some of whom have since passed away and are thus memorialised in the images.

About the artist
Croft first exhibited her work in 1985 in The women’s art exhibition at Pier 2/3, Sydney. However, it was her inclusion in the landmark exhibition NADOC contemporary Aboriginal and Islander photography at the Aboriginal Artists Gallery, Sydney, 1986, which set her artistic career in motion. Since then she has held many solo shows and been represented in numerous major national and international exhibitions. Croft is a founding member of the Boomalli Aboriginal Artists Cooperative. She is currently undertaking her PhD at CoFA, UNSW.