Brett Whiteley: drawing is everything 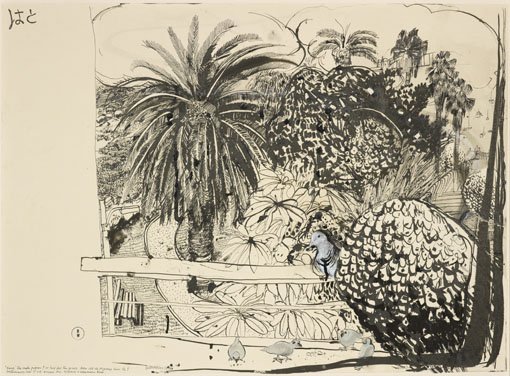 This summer the Art Gallery of New South Wales is delighted to present Brett Whiteley: drawing is everything, the first major museum exhibition to focus on the central place of drawing in Whiteley’s work.

The drawings in this exhibition have rarely been seen. They range from Whiteley’s early images of Sydney and Europe and his great abstracts that brought him international fame in the 1960s, to the lyrical landscapes, portraits, interiors and nudes that established him as one of the most prominent and well-loved Australian artists of the 20th century. Key paintings and sculptures are also showcased, underpinning the importance of drawing to Whiteley’s broader artistic practice.

“Drawing lay at the heart of Brett Whiteley’s artistic endeavours; whether the final expression was a work on paper, a painting, a sculpture or printmaking, the seed was drawing.

“Drawing is everything traces that foundation as it evolved across Whiteley’s career and encountered a multitude of influences and inspirations. It also affirms the Gallery’s belief in the importance of drawing across the broader history of art,” Dr Brand added.

Exhibition curator Anne Ryan has brought together 116 works for the exhibition from the Brett Whiteley Studio collection and the Art Gallery of NSW collection as well as loans from private and public collections across Australia.

“Drawing is everything is unmistakably Whiteley; while his unique visual language of sinuous line and bravura flourish is centre stage in major drawings, we also see a quieter, more thoughtful side of the artist in intimate drawings of a modest scale. The audience is taken on a journey from his early studies in London through the decades via the cities, landscapes and people that sustained his imagination and left their mark on his work,” Ryan said.

“Whiteley embraced drawing with gusto. His drawings served as laboratories for ideas, meditative responses to beauty in nature or the city, or as the exuberant and confident culmination of hours of working on a theme. All sing of the sheer pleasure of their evocation in pencil or ink or charcoal on paper,” Ryan added.

In the exhibition catalogue for his 1985 solo exhibition at Robin Gibson Gallery Brett Whiteley Drawings 1960 – 1985, Brett Whiteley wrote: “Drawing is a completely un-rehearsable and unrepeatable visual truth. The purpose of drawing is to make freshness permanent … Some drawings are made in order for me to see something, some are made in order for me to show something, some are made to show off … It is better to have drawn and lost than never to have drawn at all.”

An audio guide for Brett Whiteley: drawing is everything has been produced with Anne Ryan in conversation with Wendy Whiteley. Together, they reflect on the role of drawing in Whiteley’s practice as well as bringing to life the different subjects, locations and inspirations that span his career.

“Drawing is where Brett started. It was his foundation. His drawings were thought bubbles. In many ways every drawing was a self-portrait regardless of the actual subject matter. Each of his drawings holds an element of Brett,” Wendy Whiteley said.

“In Majorca in 1967 Robert Graves explained the meaning of genius to me and Brett as 98% lead, 2% mercury. The 2% mercury is the artistic brilliance, the genius – and that’s what I want people to understand about artists who have an effortlessness in their drawing.

“It’s not that mad idea that people have that you can return to the innocence of a child. You can’t go back there, but you can learn the ease of doing something like that through a lot of hard work. That’s the point, that’s the moment that’s the 2% mercury. That’s what is in Brett’s drawings,” Wendy Whiteley added.

Inviting audiences to take inspiration from Whiteley’s love of drawing, visitors to Drawing is everything will be offered a free drawing booklet and pencil to record their creative journey in response to the exhibition.

During February and March exhibition ticket holders for Drawing is everything and Gallery Members will be able to explore the world of Brett Whiteley with a free shuttle service (Friday – Sunday) that will run between the Gallery, the Brett Whiteley Studio in Surry Hills and Wendy Whiteley’s Secret Garden in Lavender Bay. Seats are limited, for more details see the Gallery website.

Public programs in association with the exhibition are on offer in February providing the opportunity for visitors to delve deeper into Whiteley’s life and artistic practice through music, workshops and a series of talks featuring Wendy Whiteley, exhibition curator Anne Ryan; Lyndon Terracini, artistic director of Opera Australia and of the forthcoming production Whiteley; and Ashleigh Wilson, arts editor for The Australian and author of Brett Whiteley: Art, life and the other thing.

The Gallery would like to acknowledge the special assistance of Wendy Whiteley and the institutional and private lenders to this exhibition.