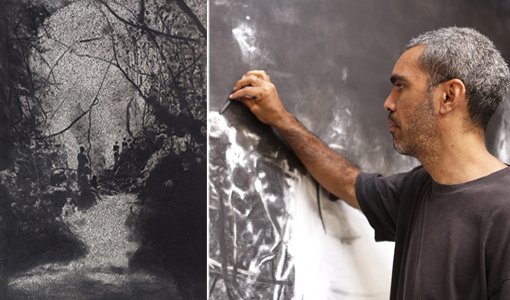 Dr Michael Brand, director of the Art Gallery of New South Wales, today announced that Daniel Boyd, 31, one of Australia’s leading artists, is the recipient of the 2014 BVLGARI ART AWARD for his work Untitled 2014.

Daniel Boyd is recognised for his interrogation of Eurocentric perspectives on Australian history and the ethics of colonisation. Boyd’s works reveal an underlying theme of inheritance and explore the effects of time and memory on the interpretation of objects and images. His current series of history paintings investigates scenes and objects with cultural, personal and art-historical significance.

In Untitled 2014, Boyd presents an idyllic scene drawn from a found photograph of Pentecost Island in Vanuatu. Pentecost Island was home to Boyd’s great, great paternal grandfather before he was brought to the sugarcane fields in Queensland as a slave. Many South Sea islanders were brought here to support this industry between 1863 and 1904, under controversial recruitment processes. They worked for little or no pay and often endured harsh conditions, with their important contribution to Australia receiving little recognition.

Contemplative, emotive and intriguing, Untitled 2014 exposes this aspect of our history and explores Boyd’s tenuous attachment to the country of his ancestors. Veiled in transparent dots, the view of country is partial, incomplete, like the recording of history. Rendered in a reduced palette, the work is in stark contrast to typical colourful depictions of a carefree island life and may be seen to allude to the sadness of events of the past and the personal implications of this for Boyd in the present.

My recent work is about the trajectory of information and how it passes back and forth over time and between cultures. Through the movement of information, details and facts associated with historical events and objects are lost. The paintings acknowledge this process and are a remembrance of that loss. They recognise that we will never be able to fully comprehend our past or our future. My use of dots references the idea of the cultural lens and the fact that we all have different points of view, said Daniel Boyd.

Wayne Tunnicliffe, head curator of Australian art at the Art Gallery of New South Wales, said: Daniel Boyd has already made an impressive contribution to Australian art and this painting comes from a significant body of work in which Boyd has developed a new visual language for history painting. They are ambitiously large in scale but the subjects are derived from small historic photographs. The image is formed from dots of paint where tonal gradations and shifting light create the landscape and figures, the dotting reminiscent of various historical and recent sources in both western and Aboriginal art.

Julie Ann Morrison, managing director of Bulgari Australia and UK, said: The selection of Daniel Boyd as the recipient of the Bulgari Art Award 2014 in the third year of this annual award is inspired. In Daniel Boyd’s work we find a masterful blend of mixed traditions in form and content. His use of historic photographs transformed into large-scale paintings rendered in dots brings representations of our history into a unique contemporary view which does not shy away from the past.

The Bulgari Art Award consists of a $50,000 painting acquisition for the Art Gallery of New South Wales and a residency in Italy valued at $30,000. The total award of $80,000 is one of the most valuable art awards in Australia. The award winner is selected by the Gallery’s Trustees, the director and the head curator of Australian art. Previous winners include Michael Zavros in 2012 and Jon Cattapan in 2013.

Daniel Boyd is a Kudjla/Gangalu man from far north Queensland. He left Cairns to study at the Canberra School of Art and now resides in Sydney. Boyd has been exhibiting since 2005 and has been included in the following exhibitions: Up In Smoke Tour, Natural History Museum, London, 2012; 7th AsiaPacific Triennial of Contemporary Art, Queensland Art Gallery of Modern Art, Brisbane, 2012; Crossing cultures: the Owen and Wagner Collection of contemporary Aboriginal Australian art, Hood Museum of Art, Dartmouth, New Hampshire, 2012; and Culture warriors: National Indigenous Art Triennial, National Gallery of Australia, Canberra, 2007.