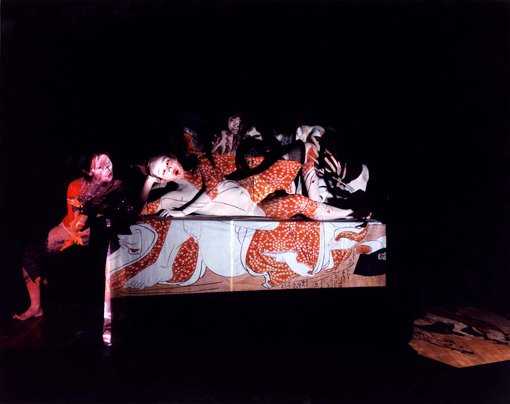 The camera is generally assumed to be unable to depict that which is not visible to the eye. And yet the photographer who wields it well can depict what lies unseen in his memory.

For over fifty years, internationally acclaimed Japanese photographer Eikoh Hosoe has been producing cutting edge works demonstrating a unique mastery of the photographic medium. Early on in his career he abandoned the documentary style prevalent in the post-war years and produced photographs that breathed a sense of experimentation and freedom into photography. By calling on mythology, metaphor and symbolism he created images that broke the bounds of traditional photography. Hosoe developed a unique style situated at the crossroads of several different art forms, combining photography with elements of theatre, dance, film and traditional Japanese art.

Hosoe gained recognition in the late 1950s when he began to develop his close-ups of the human body. Embrace, a series of black-and-white, abstract nude photographs, encapsulates Hosoe’s strive for originality in this photographic genre.

Through the novelist, Yukio Mishima, Hosoe was to meet Tatsumi Hijikata, one of the founders of Butoh dance. After seeing Hijikata’s performance, adapted from the novel Kinjiki (Forbidden Colours) by Mishima in a small Tokyo theatre, Hosoe was inspired and began photographing the Butoh dancer, a collaboration which continued for many years and culminated in the series Kamaitachi (1965-1968). This series, shot on various locations in the rural Tohoku region, integrated elements of dance, theatre and documentary into a cinematic work that aimed to recreate and dramatise Hosoe’s childhood memories.

Hosoe’s association with Butoh also led him to photograph the renowned Butoh performer, Kazuo Ohno. Released in 2006 in celebration of Ohno’s 100th birthday, the series The butterfly dream is a poignant visual documentary of Ohno’s artistic development over 46 years. While they retain the drama intrinsic to Butoh, Hosoe’s photographs of Ohno focus in on details of Ohno’s body, the curve of a wrist or a facial expression caught between agony and ecstasy.

Hosoe’s latest colour work, Ukiyo-e Projections, revisits his early work by linking it into ukiyo-e and Butoh dance. This series was born when he found out that the experimental Asbestos Dance Studio, founded by Hijikata and his wife, was to close in 2003 after forty years of activity. Upon hearing about the closure, Hosoe felt the need to pay a photographic tribute “to express gratitude for all that it had produced”. Ukiyo-e Projections was completed on stage at the Studio during a series of sessions in 2002 and 2003. For this series Hosoe created what he calls a “photographic theatre”, projecting a mixture of his own photographs with ukiyo-e prints on to the white-painted bodies of young Butoh dancers. The series explores many of the themes that recur in his work: sexuality, the human form and movement.

Eikoh Hosoe: Theatre of Memory highlights Hosoe’s mastery of photography through his four seminal series, Embrace, Kamaitachi, The Butterfly Dream and Ukiyo-e Projections, showing Hosoe’s sensibility for theatre, performance and the human body. It further demonstrates his creativity and mastery of photographic printing techniques. Throughout his career Hosoe, a master printer, has experimented with both film-based and digital techniques to develop new methods of photographic expression. In recent years, he has combined new printing technologies with Japanese washi paper to present his work on traditionally made silk screens and scrolls.

This is the first solo exhibition of Hosoe’s works in Australia.

Hosoe, 77, is currently completing a new series of works on the sculpture of Auguste Rodin.

The exhibition Eikoh Hosoe – Theatre of memory is realised in collaboration with Studio Equis, France.