Showcasing over 200 of his photographs

The first comprehensive exhibition in Australia of the work of Eugène Atget (1857–1927) will showcase over 200 photographs primarily from the more than 4000-strong collection of Musée Carnavalet, Paris, with the important inclusion of Atget’s work, as compiled by Man Ray, from the collection of George Eastman House, Rochester, USA.

The photographs offer a portrait of the city of Paris and its outskirts and clearly reveal the evolution of Atget’s work. Atget did not train as a photographer and only turned to it to try to earn a living, having been unsuccessful in other fields. He started out in the provinces but soon arrived in Paris, where he lived for the rest of his life. Atget was considered a commercial photographer who sold what he called ‘documents for artists’, ie photographs of landscapes, close-up shots, genre scenes and other details that painters could use as reference. As soon as Atget turned his attention to photographing the streets of Paris, his work attracted the attention of leading institutions such as Musée Carnavalet and the Bibliothèque Nationale, which became his principal clients.

The Art Gallery of NSW is the only Australian venue. The exhibition is jointly organised by Fundación Mapfre, Nederlands Fotomuseum, Art Gallery of New South Wales, Musée Carnavalet-Histoire de Paris, and Paris Musées. 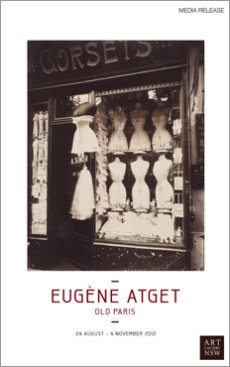