Come face to face with the guardian warriors of China’s First Emperor, entombed for over 2000 years.

The First Emperor: China’s entombed warriors brings to Sydney one of the greatest archaeological discoveries of our time. This major exhibition presents over 120 objects, 10 of the world-renowned warriors and horses, and significant recent finds from the First Emperor’s mausoleum located in the province of Xi’an, central China.

This exhibition explores the period of Chinese history preceding the Qin dynasty of the First Emperor, and then establishes his considerable achievements. Through a display that evokes the actual pits of the entombed warriors, visitors are given an unprecedented opportunity to examine up close the intricacies of these wondrous life-size figures. The final section of the exhibition adds to the evolving story with a number of recently discovered objects.

The exhibition is drawn from institutions including the Museum of Terracotta Warriors and Horses, the Shaanxi Provincial Archaeological Institute and the Shaanxi History Museum. 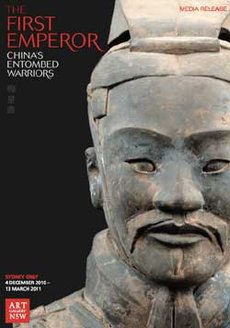