For his work ‘Made in Wadeye’ 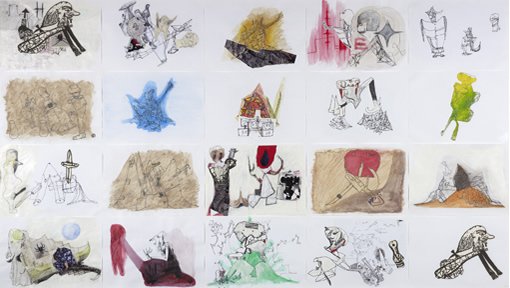 30 November 2012. The Art Gallery of NSW today announced that Gareth Sansom is the winner of the Dobell Prize for Drawing 2012 for his work, Made in Wadeye, a suite of 20 drawings in ink, lead pencil, graphite, coloured watercolour pencil, felt tipped pen, ball point pen, egg tempera, earth and collage.

Sansom has been a pre-eminent figure of the Australian avant-garde for over 50 years. His watercolours, collages and paintings are based on a personal iconography that includes imagery of a sexual, satirical and philosophical nature.

The winning work, Made in Wadeye, was made during the artist’s visit to a remote Aboriginal settlement south-west of Darwin during September 2012, where his wife was engaged in clinical work as a doctor. Reference to the Wadeye community can be found in a small, collaged, photocopied map, and earth, captured in the egg tempera paint. But although the visit to Wadeye was the impetus for the series, it was not its subject. As the artist states: ‘I make stream-of-consciousness drawings with sources going back years.’

‘Made in Wadeye hovers on the outskirts of figuration and on the borderline of abstraction. I am attracted to the freshness of the work, its clarity and its light playfulness, and the unpredictability of the succession of images, and delicacy of the rapport between them,’ said Aida Tomescu, the judge for this year’s Dobell Prize.

Born in Melbourne, Gareth Sansom, 73, studied art at RMIT between 1959 and 1964 and came to prominence in the 1960s as a radical convention-breaking painter, with influences ranging from Picasso and Jean Dubuffet to Francis Bacon and British pop art. He was Head of Painting, then Dean of the School of Art, at the Victorian College of the Arts between 1977 and 1991. Sansom has exhibited widely, represented Australia at the Seventh Triennale, India in 1991 and won numerous awards, including the National Works on Paper Award in 2006 and John McCaughey Memorial Prize in 2008.

It was also announced today that this year will be the final Dobell Drawing Prize in its present form. After 20 years, the Art Gallery of NSW and the Sir William Dobell Art Foundation have confirmed a renewed and refreshed approach to the exhibition of contemporary Australian drawing at the Gallery and are pleased to announce a new initiative at the Art Gallery of NSW – the Dobell Australian Drawing Biennial – to be launched in 2014.