Imprint: photography and the impressionable image

The metaphoric connection between photography and the sculptural cast 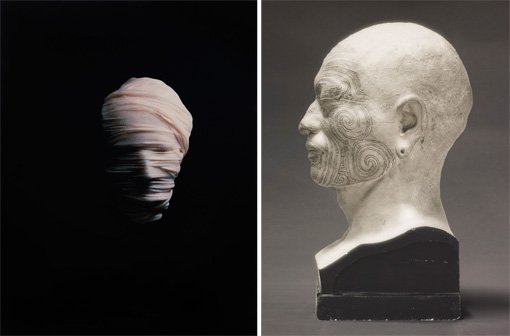 Imprint: photography and the impressionable image investigates the metaphoric connection between photography and the sculptural cast, placing these two mediums in direct dialogue. Drawn exclusively from the Gallery’s collection, the exhibition presents photographs by Australian and international artists that feature life casts, death masks, fossils, wax moulds and other cast forms.

“Photographs and sculptural casts are both modes of reproduction that memorialise their subjects. They record a likeness but also retain a trace of the subject itself. Whether this trace is left by physical contact – as it is in the sculptural cast – or light – as it is in the photograph – it binds the subject to its reproduction. The works in Imprint address this complex relationship, examining the tension that exists between the original and the copy, the animate and the inanimate, and the mask and the memorial.

The exhibition features 19th-century photographic material alongside work by contemporary practitioners. It was during the 19th century, with the photographic medium in its infancy, that photography and sculpture became affiliated with one another.

Early photographic practitioners often used statuettes and plaster casts as subject matter. These stationary objects could withstand the long exposure times that photographic technology demanded and their surfaces were still legible in early photographic prints. Both mediums contributed to the mass industry of copies and reproductions that began to thrive in the 19th century. The connection between the two mediums is still as resonant today.

Imprint showcases 31 works by 24 artists and is accompanied by a series of exhibition talks held on the second Wednesday of every month at 5:30pm, as part of the Gallery’s regular late night program, Art After Hours. These talks will feature artists in the exhibition and other experts.