Selections from the Portvale Collection 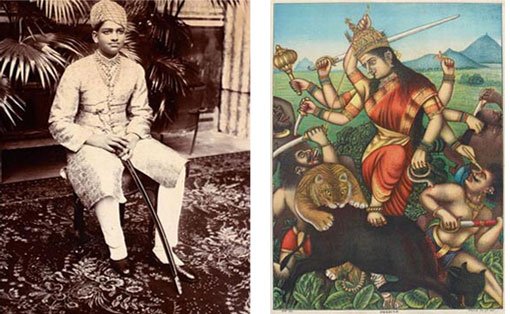 The Indian Empire exhibition, shaped by a promised gift of significant works from the Portvale Collection, introduces the competing narratives that emerged following the first European encounters with India.

This extensive exhibition, comprising prints, photographs, posters and textiles, includes images of the India of the European imagination together with images created under the patronage of foreigners overwhelmed by a totally different country and culture. Such images favoured portraits, depictions of the manners, customs and costumes of the Indian people, as well as topographical prints in the ‘picturesque’ style then in vogue in England.

Early Europeans in India were explorers and traders lured by the wealth in spices, textiles, tea and opium. The East India Company came to dominate trade to the extent it effectively took over India after the Battle of Plaissey in 1757, and continued to maintain an army of British and Indian soldiers until the British Crown took over in 1858. As the wealth of foreigners grew, so did their demand for art, a demand met by local artists, as well as visiting European artists keen to earn a living by catering to the tastes of the new elite. Paintings and prints in the exhibition capture the fascination and admiration Europeans felt for the people and cultures they encountered.

This early phase of interaction between Indians and foreigners was brutally curtailed in 1857 with the First War of Independence (the Indian Mutiny), images of which are in the exhibition. The Mutiny ended the rule of the East India Company, and ushered in the Indian empire, better known as the Raj, with Queen Victoria being declared the Empress of India in 1877. The formal British rule of India was to last until Indian Independence in 1947.

During the period of British rule, photography (a focus of the Portvale collection) was adopted with great enthusiasm by Indians and foreigners, amateurs and professionals. There survive countless albums belonging to Indians and to those foreigners resident in India from the late 19th to the early 20th century. The albums in this exhibition presents the breadth of subjects covered: formal portraits, tea parties, balls, hunts and landscapes images by some of the most well known photographers of the 19th and early 20th century in India. Through the books, albums, photographs and prints produced during the rule of the British in India (known as the Raj), the wondrous, past worlds of English colonels and Indian princes are evoked.

Another focus of the Portvale collection is the fine embroidery distinctive to the areas of Kutch and Saurashtra in west India. India has always produced wondrous textiles, and while much textile production in India before Western imperial powers arrived was geared towards the export trade, cloth was of course also produced continuously for local use. In the princely kingdoms specialists crafted finely detailed textiles for the royal courts. In the countryside village women embroidered blouses, skirts or shawls or made hangings to decorate their dwellings. The onset of British rule did not disrupt such creativity nor did the coming of independence in 1947. Such folk art continues to be created as demonstrated by some magnificent examples in the show.

Also included are the vibrant lithographic prints created from the first introduction of the press in India in the mid 19th century. The prints were popular for imaging the numerous gods of Hinduism that could be bought cheaply to hang in the home. These prints also became a potent medium for political activists as the movement for Indian independence became stronger. The prevalence of these dramatic, ubiquitous images has affected the work of contemporary artists, as shown by a set of ten photographs by Indian artists Pushpamala N. and Clare Arni.