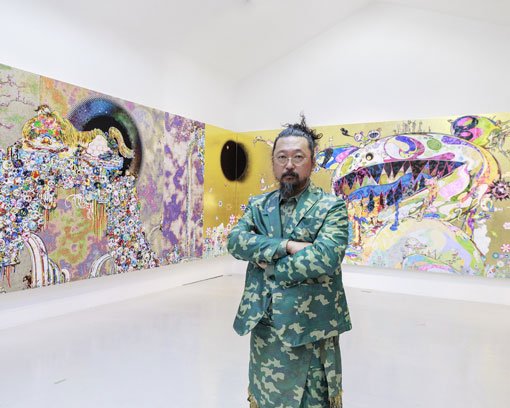 Featuring over 180 wildly imaginative works by some of the greatest Japanese artists of the past and present, from historical master Katsushika Hokusai to contemporary superstar Takashi Murakami, the Art Gallery of New South Wales is thrilled to present Japan supernatural as part of the 2019–20 Sydney International Art Series.

Japanese artists across the centuries have created a lively parade of magical animals, fiendish imps, legendary monsters and ethereal spirits. Known in Japan by many names including yōkai, yūrei, bakemono and mononoke, manifestations of the paranormal are prevalent in folklore, literature, theatre and art.

Centred on a monumental installation of painting and sculpture by Takashi Murakami, Japan supernatural features works by the late manga artist Mizuki Shigeru and contemporary artist Tarō Yamamoto as well as masks by Hideta Kitazawa.

These artists continue the creative lineage of visualising the unseen, their works presented together with some of the greatest Japanese artists of the past including Katsushika Hokusai, Utagawa Kuniyoshi, Tsukioka Yoshitoshi and Kawanabe Kyōsai.

The paintings, woodblock prints, illustrated books and objects come from museum collections around the world and from the Gallery’s significant collection of Japanese art, which began in the late 1800s with the gift from Japan of a group of ceramics and bronzes to the then new Gallery, following the Sydney International Exposition in 1879.

Art Gallery of NSW director Dr Michael Brand said the exhibition is the largest and most complex exhibition of Japanese art in the Gallery’s history.

“This project is the outcome of extensive discussions between a broad Gallery team and our international museum colleagues, as well as private collectors around the world. It has resulted in some of the finest works of Japanese art ever created on display exclusively in Sydney,” Brand said.

“In particular, works are coming to us from the British Museum, the Museum of Fine Arts, Boston and the Minneapolis Institute of Art whose collections of Japanese art are outstanding.”

“A key work from the Museum of Fine Arts, Boston is Toriyama Sekien’s five-metre-long, exquisitely rendered scroll, Night procession of the hundred demons (Hyakki yakō zu) c1772–81. This extraordinary painted handscroll depicts a large cast of otherworldly characters – a perfect welcome to the exhibition for our visitors,” Dr Brand said.

Additional works for Japan supernatural from the MFA, Boston include prints by renowned artists Tsukioka Yoshitoshi and Kawanabe Kyōsai, with a selection of works from Yoshitoshi’s series One hundred ghost stories from Japan and China (Wakan hyaku monogatari) 1865 as well as Momotarō scattering beans for setsubun (Momotarō mamemaki no zu) 1859. Prints designed by Kyōsai include A nose-pulling contest with an elephant (Zō no hanabiki) and The great tengu does calligraphy (Sho no dai tengu) from the series One hundred pictures by Kyōsai (Kyōsai hyakuzu) 1863.

Among the many striking works from the Minneapolis Institute of Art are all images from the series One hundred ghost stories (Hyaku monogatari) c1831–32 by Japan’s internationally beloved artist Katsushika Hokusai, including the chilling portraits The ghost of Oiwa (Oiwa-san), The mansion of plates (Sarayashiki) and Laughing demoness (Warai hannya),* as well as exceptional paintings by Shibata Zeshin, Kyōsai and Yoshitoshi.

From the British Museum comes the work of celebrated artist Utagawa Kuniyoshi, Mitsukuni defies the skeleton spectre conjured up by Princess Takiyasha 1845–46. This woodblock print triptych depicts a notorious scene from legend, a terrifying giant skeleton or ōdokuro summoned by a princess in revenge for the murder of her father.

Exhibition curator and Art Gallery of NSW senior curator of Asian art Melanie Eastburn said the exhibition celebrates representations of the tales, events and beings of the mysterious unseen worlds in Japanese art from the Edo period (1603–1868) to the present day.

“Japanese artists have used intricate narratives and powerful imagery to make the invisible world of the supernatural tangible,” Eastburn said.

“The imagination and skill of artists such as Sekien, Kuniyoshi and Yoshitoshi continue to resonate just as contemporary expressions of legend, fairy tales and spirits in the work of Murakami, Aoshima, Yanagi, Kitazawa and Matsui captivate viewers, luring us into the beguiling, tangled realm of demons and spirits,” Eastburn added.

A beautifully designed, richly illustrated book has been published by the Art Gallery of NSW in conjunction with the exhibition with contributions from specialist writers from Australia, Japan and the USA.

The public events running alongside the Japan supernatural exhibition have something for everyone. They include a rare talk by Takashi Murakami; a lecture series, Phenomenal beings: spirits in Japanese art and culture; a spooky retrospective of global horror cinema; a Japanese art summer school and for families and children, January school holiday workshops.

A Studio Ghibli festival, perfect for art lovers of all ages and an exclusive after-hours event hosted by the Gallery’s Youth Collective will also spirit guests away to the realm of the supernatural in Japanese art.

The Sydney International Art Series is synonymous with world-class exhibitions and is a celebration of the collaboration between Destination NSW, the Art Gallery of New South Wales and the Museum of Contemporary Art Australia.

“People travel from all over the globe to our beautiful Harbour City to visit the Sydney International Art Series every year because it showcases internationally-recognised art in exhibitions not seen anywhere else,” Mr Ayres said.

“Together the two exhibitions are a major visitor drawcard for our State. It is creative initiatives like this which enable NSW to remain the number one visitor destination in Australia and ultimately, allow us to continue to supercharge the NSW economy,” Mr Ayres added.

Since its inception in 2010, the Sydney International Art Series has generated over $149 million in overnight visitor expenditure for the State, and attracted over 2.1 million attendees. Of these, more than 201,000 overnight visitors travelled to Sydney from overseas, interstate and regional NSW, specifically to view the exhibitions at the Art Gallery of NSW and the MCA.

Note to editors:
Owing to their rarity and fragility, for conservation reasons the works from the series One hundred ghost stories (Hyaku monogatari) c1831–32 by Japan’s internationally beloved artist Katsushika Hokusai, including the chilling portraits The ghost of Oiwa (Oiwa-san), The mansion of plates (Sarayashiki) and Laughing demoness (Warai hannya) will be replaced by other works during the exhibition period. 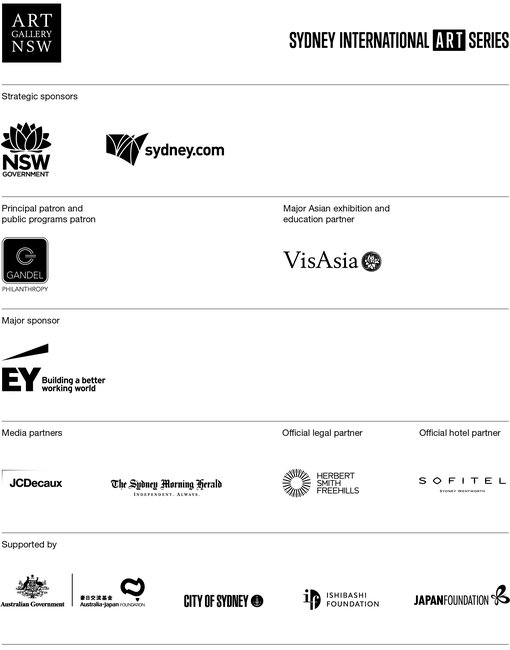