The first survey of Russell’s work in forty years 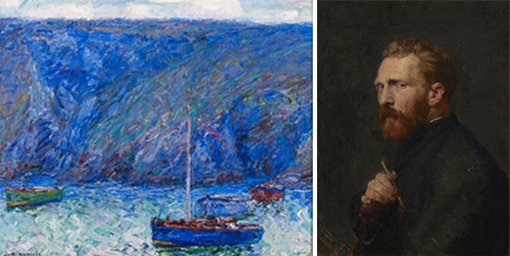 Australian impressionism is arguably the first Australian art movement, and yet the most impressionist of Australia’s artists lived and worked in Europe for forty years. John Russell’s unique engagement with French art in the 1880s and 90s led to his painting in a pure French impressionist style before he explored new directions at the turn of the century.

While artists such as Tom Roberts and Arthur Streeton were engaging with ideas of place and identity in their work in Australia, and shaping a nationalist genre of art in the 1890s, Sydney-born Russell was painting and forming close friendships with the leading artists in Paris, including Vincent van Gogh and Auguste Rodin. He dined with Claude Monet and taught colour theory to Henri Matisse.

Exhibition curator, Art Gallery of New South Wales head of Australian art Wayne Tunnicliffe, says Russell’s capacity for friendship during a time when camaraderie was greatly valued meant his experience as an artist was fundamentally shaped by an exchange of ideas about art within a remarkable international peer group.

“Russell’s move to Europe was an enterprise fraught with risk but the reward was the freedom to paint at the edge of the French avant-garde – all the more remarkable for someone born so far away,” Tunnicliffe said.

The first major survey of Russell’s work in 40 years, the exhibition brings together 120 paintings, drawings and watercolours, drawn from the Art Gallery of NSW collection and from private and public collections around the world including the Van Gogh Museum in Amsterdam, the Musée d’Orsay in Paris and the Philadelphia Museum of Art.

Art Gallery of NSW director Dr Michael Brand said, “I am especially grateful to my colleagues at European and North American art museums who have supported this ground-breaking exhibition by lending significant works by both Russell and his French friends and peers.”

“The John Russell exhibition is a dream project for the Art Gallery of New South Wales, giving us the chance to explore a moment of great artistic creativity in Europe through the lens of a Sydney-born Australian artist,” Dr Brand added.

Highlights in the exhibition include:

• John Russell’s 1886 portrait of Vincent van Gogh displayed next to Van Gogh’s Self-Portrait with felt hat 1886-87, showing the close affinities between their practices at the time.

• Twelve Russell paintings from the Musée d’Orsay, including works that have never been seen in Australia.

• Six of Russell’s magnificent blossom paintings from 1887, which inspired Van Gogh, brought together from public and private collections.

• Russell’s In the morning and In the afternoon, both painted in Antibes 1890-91, reunited for the first time since they were displayed together at the New English Art Club in London in 1891.

• The intensely coloured Morning, Cruach en Mahr, Belle-Île-en-Mer, exhibited at the 1905 Salon d’Automne where Matisse and his friends were labelled ‘wild beasts’, from an English private collection.

The exhibition presents fresh perspectives on this remarkable artist and includes significant works rediscovered recently and exhibited publicly for the first time. The breadth of Russell’s art is on show in John Russell: Australia’s French impressionist from his studies in London and Paris, through impressionism and experimentation with pure colour, to his later fauve-like luminous watercolours.

Tunnicliffe says Russell’s legacy resides in his finest paintings, exemplars of impressionism painted in France concurrently with the broader acceptance of the movement by the French public, and later in the best of his expressive post-impressionist work in which he exhibits an exceptional capacity for bold colour and free brushwork.

“Russell’s importance also lies in his life providing us an alternate history of Australian art which takes place outside of Australia and which does not involve national subjects located in landscape or masculine labour, but which remains intimately connected through and with Australia.

“In all the time he was overseas, Russell never forgot he was Australian and yet his Australianness does not reside in such clichés as his adventurous spirit, his renowned athleticism or bold painting but in his internationalism in the late 19th century when the most ambitious new-world artists sought to test themselves against the old-world art capitals,” Tunnicliffe said.

Most recently in 2016-17, the work of John Russell was exhibited in the exhibition, Australia’s impressionists, at the National Gallery in London – the first exhibition of its kind in the UK.

Christopher Riopelle, National Gallery curator of post 1800 paintings said, “Russell, who must have had a genius for friendship, was uniquely open to the most exciting stimuli contemporary art and artist friends like Van Gogh, Monet and Matisse threw his way. He absorbed it all and responded with radiant works that are unmistakably his own. Visitors to Australia’s Impressionists here in London in 2016-17 were delighted to discover that an expatriate painting in Europe still could embody the Australian spirit of openness and love of innovation.”

A unique audio experience in the exhibition space will bring to life the themes of the exhibition, providing an exhibition score, information and context for visitors about Russell’s works.

Art after Hours: John Russell
Wednesdays, 25 July – 8 August, 5-10pm
Art After Hours delves into the world of Australia’s French impressionist John Russell by looking at his time in Belle-Île, which is captured in the exhibition. Author Sarah Turnbull (Almost French) talks about her life as an expatriate in France. Artist Luke Sciberras who undertook a pilgrimage to Belle-Île in 2017 talks about his artistic heroes Monet, Rodin and Russell and visiting the island. And filmmaker Catherine Hunter joins us to share her adventures filming Russell’s Belle-Île for a documentary to be aired in Australia.