The sacred music of colour 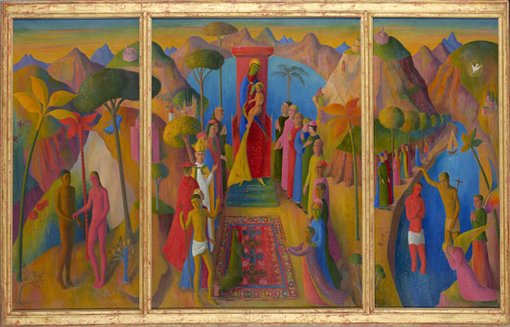 You’ve got no idea of what it’s like being inside my brain: it’s terrible.

This is the first major exhibition of the work of Justin O’Brien held at an Australian state gallery since his death in 1996 at the age of 79. The retrospective will include 94 paintings, watercolours and drawings spanning seven decades, some of which have not been seen in public for more than 60 years.

Encompassing work from the artist’s first years as a student in Sydney in the 1930s up until his final years living in Rome, this exhibition will endeavour to liberate O’Brien from the perception that he was merely an illustrator of religious themes in the modern era. The sumptuous detail of his still lifes, portraits, landscapes and religious narratives attest not only to O’Brien’s commanding use of colour and form, but also reveal his wide-ranging knowledge of art history and literature.

Justin O’Brien was born in Sydney’s south west in 1917 into a deeply religious Irish Catholic family, the third of five surviving children. It was his mother, Teresa Mary, who nurtured her children’s creative talents and instilled in them her spiritual heritage. School was tedious for O’Brien and he escaped its confines early to study art full-time, becoming a teacher of the craft when his peers were still sitting for exams.

According to Barry Pearce, who knew the artist well: ‘O’Brien loved people, loved drawing and painting portraits and ensembles of figures, and telling stories through time-honoured themes. He illuminated through a deep biblical knowledge basic questions of the human condition played out like a sort of timeless medieval procession.

‘But above all he yearned for an answer to the big question concerning a transcendental existence. His answer came, not through religion, but an aesthetic, manifested in the intense music of his colour, its harmonies and dissonances; and by the inventiveness of his design.’

‘At the same time,’ says co-curator Natalie Wilson, ‘parallel to the richness of his art is a remarkable story of compassion and respect shared between the artist and the people he encountered throughout his life. O’Brien was captured by the German army at the beginning of World War Two and spent almost three years in a prison camp; firstly near Athens, then Toruń, Poland. Here his camaraderie, his humour and his gift for lifting the spirits of fellow prisoners became legendary.’

After the war, O’Brien’s teaching at Sydney’s Cranbrook School also became renowned and many of his students went on to become practising artists. One ex-student, Martin Sharp, has described him as his ‘art father’ because of his fervent belief that the study and practice of art was a genuine doorway to fulfilment.

Justin O’Brien died in 1996 in Rome, the city that had been his home and spiritus locus for three decades. His passing was mourned by all who knew him; friends, family and countless pupils. He died with singular pride that the Vatican, centre of his faith from which he had drifted and returned to, had acquired one of his paintings, The raising of Lazarus, for permanent display in its galleries of modern art.

The Art Gallery of NSW will be the only venue for this long-awaited survey of a much-admired artist, and the first retrospective held at a major state gallery since 1987.