Sekka was one of the greatest visionaries of modern Japanese art and design. 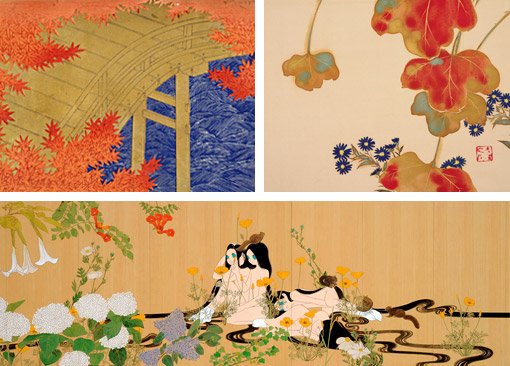 Kamisaka Sekka (1866–1942) was one of Japan’s leading artists, designers and art instructors of the first half of the 20th century. Fusing influences of modern European styles such as Art Nouveau and the British Arts and Crafts Movement, as well as traditional Japanese art, Sekka created bold, visually dynamic designs and devised an innovative approach to craft production, earning him the reputation as one of the greatest visionaries of modern Japanese art and design.

Sekka’s paintings on scrolls and screens, drawings for lacquerware decoration, ceramics and textiles revived the decorative tradition of Rinpa – a quintessentially Japanese style, popular in Japan since the early 1600s.

‘The brilliant colours and powerful designs of his paintings have led him to be considered one of the masters – or even the last master of the longstanding Japanese decorative tradition, Rinpa,’ said Khanh Trinh, curator of Japanese art, Art Gallery of New South Wales.

In accordance with the practice of the early Rinpa artists, who advocated a close collaboration between diverse media, Sekka embraced the idea of the ‘artist as designer’, working closely with artisans who made objects based on his designs.

Like his European counterparts, Sekka realised that the role of design – including industrial, interior and graphic design – would dominate modern aesthetics.

To provide an understanding of his development, the exhibition also features works by Rinpa masters of the 1600s to 1800s, such as Ogata Kōrin who gave the movement its name. And to demonstrate the enduring allure of Rinpa and Sekka, there is a range of works by contemporary Japanese artists as well as Sydney-based fashion designer Akira Isogawa.

Major lender to the exhibition is the Hosomi Museum, Kyoto, which is recognised as housing one of the most extensive and superb collection of Sekka’s and Rinpa art in Japan. Other loans come from the private collections of the descendants of Sekka and other crafts artists with whom he collaborated.

The exhibition consists of over 100 exquisite paintings, ceramics, textiles, woodblock prints and drawings and is the first time that such a comprehensive display of his design work has been shown in Australia.

“Marsh is proud to sponsor this wonderful Kamisaka Sekka exhibition. As a principal sponsor and risk and insurance partner of the Gallery we are delighted help provide Australians the opportunity to experience one of the great Japanese masters of the early 20th century here in the Art Gallery of NSW.”
– John Clayton, Region Head, Pacific, & CEO, Marsh Australia

An exhibition in two parts

Due to their fragile nature, not all works can be displayed for the entire period. The exhibition will close for two days while around 30 of the approximately 100 works are changed over.