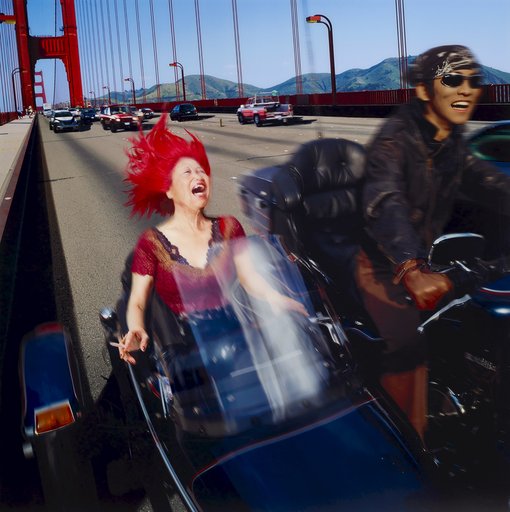 Coinciding with the 40th anniversary of International Women’s Year (1975), the Art Gallery of New South Wales is pleased to present Loud!, a selection of photographs of women by women. Drawn from the Gallery’s photography collection and consisting of nine powerful works, Loud! showcases four contemporary artists from Australia and abroad: Miwa Yanagi, Yvonne Todd, Anne Zahalka and Rosemary Laing.

Loud! confronts the manner in which women are routinely depicted photographically. The photographers shatter stereotypes and cultivate their own distinct images of womanhood. Confronting mainstream media norms, these compelling works are laced with humour, yet also possess a dark side.

New Zealand photographer Yvonne Todd reworks the stylistic tropes of the studio portrait and the glamour shot to construct studies of exaggerated femininity that often collapse into the surreal. Swathed in embellished costumes, wigs and acrylic nails, her heavily made up subjects are placed against nondescript studio backdrops that augment the artificiality of the scene. Their poses are awkward and their facial expressions are impassive. Often, the veneer of overt femininity is interrupted by subtle overtones of the grotesque.

Just as Todd’s staged photographs enshrine their subjects behind the mask of stylised feminine aesthetics, Australian artist Anne Zahalka’s portraits of wax replicas of famous actresses expose the deception that undercuts the construction of female celebrity. Her Nicole Kidman is flawless but also lifeless. It is an idealised image of beauty that is an illusion.

Japanese artist Miwa Yanagi situates her female subjects within fictional contexts. In her series My grandmothers (three of which are included in Loud!) Yanagi invites young women (and some men) to imagine themselves as old women and formulate narrative trajectories for their future selves. Acting out these imagined scenarios with the help of prosthetic make-up and digital post production, Yanagi’s models are granted power and agency over their own lives.

For her series a dozen useless actions for grieving blondes, Australian artist Rosemary Laing hired a group of actresses who look almost identical and asked them to cry for the camera. With their skin red and raw and their tears glistening the women pervert the archetypal image of the bubbly blonde bombshell. Like the anonymous chorus in a Greek Tragedy, their sorrow speaks on behalf of the pain of others.

Serving as case-studies of constructed and fabricated female personas, the works featured in Loud! examine the role photography plays in the invention of meaning. Here the tension between a photograph’s claim to veracity and the wilful manipulation of its subject matter is teased apart.

Loud! is one of a number of photographic exhibitions that focus on women to be held at the Gallery this year. A solo installation of artist Rosemary Laing opens 11 July 2015 and Julia Margaret Cameron: from the Victoria and Albert Museum, London opens 14 August 2015.