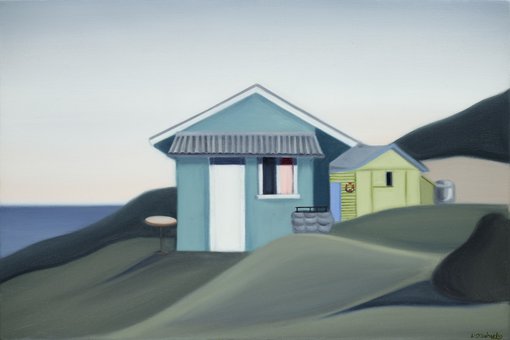 The Art Gallery of New South Wales is pleased to announce that Sydney artist Lucy O’Doherty has won the 2016 Brett Whiteley Travelling Art Scholarship, a national painting prize awarded annually to a young Australian artist and valued at $30,000.

O’Doherty graduated from the National Art School in Sydney in 2011. She was recently a finalist in the Pro Hart Outback Art Prize (2016) and the Mosman Art Prize (2015). O’Doherty’s winning body of work makes reference to Australian suburbia, suffused by nostalgia and mystery in her depiction of huts in the Royal National Park, south of Sydney.

“Her combinations of tertiary and pastel colours are unusual, and her sense of form defies logic and yet makes sense. There is a stillness about these paintings which I admire.

“Lucy’s work shows a level of maturity and qualities of perseverance which I think will serve her well when she goes to Europe; to live in an unfamiliar culture, absorb great art, and take on new challenges and painting motifs,” Carment said.

O’Doherty will spend a three month residency at one of the Art Gallery of NSW’s studios at Cite Internationale des Arts in Paris, and up to a further three months travelling throughout Europe for her professional and creative development. A stipend valued at $30 000 will support O’Doherty’s living and travel expenses while in Europe.

Established by the late Beryl Whiteley in 1999, the scholarship commemorates the profound effect international travel and study had on her son, renowned Australian artist Brett Whiteley, who won the Italian Government Travelling Art Scholarship at the age of 20.

“It’s exciting to see that four of this year’s scholarship finalists are also Archibald, Wynne and Sulman Prizes finalists either this year or in years past, including Jason Phu, Abdul Abdullah, Clara Adolphs and Tsering Hannaford,” Brand added.

“Jason’s paintings have a refreshing exuberance. He revitalises a traditional form of painting; his scatter-gun ink calligraphy forming a dynamic matrix for the placement of his humorous and disparate imagery,” Carment said.

The painting Shack at Little Garie from O’Doherty’s winning body of work is currently on display at the Brett Whiteley Studio alongside works by finalists Jason Phu (Highly Commended), Abdul Abdullah, Clara Adolphs, Tsering Hannaford, Andrew Hopkins and Zoe Tweedale. These artists were shortlisted from a total of 91 entries.


Friday – Sunday only
Free admission made possible by J.P. Morgan