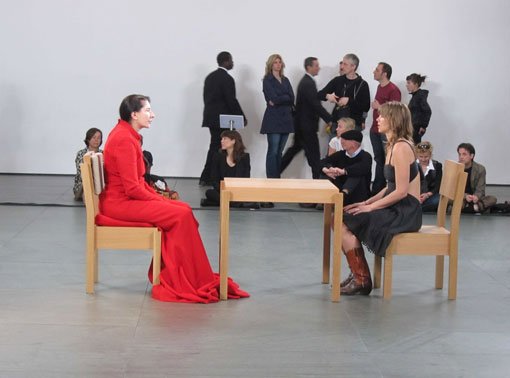 Still from The artist is present 2012, director Matthew Akers and Jeff Dupre.

The program features three special offerings, illuminating the life and work of past Kaldor Public Art Projects artists. The Spotlight on Kaldor artists series marks the launch of the exhibition, and features landmark films and documentaries on artists Christo and Jeanne-Claude, Gilbert & George, Marina Abramović and Anri Sala. On the opening weekend, exclusive screenings of works by pioneering video artist Bill Viola will be presented and the monthly movie marathon series offers a deeper dive into the wealth of cinematic material on Kaldor Public Art Projects artists.

Curated by Art Gallery of NSW curator of film, Ruby Arrowsmith-Todd, the Spotlight on Kaldor artists film series runs for the month of September. Arrowsmith-Todd said audiences can enjoy insights into the working processes and inspiration of some of Kaldor Public Art Projects artist alumni.

“The Spotlight on Kaldor artists film series begins with a Christo and Jeanne-Claude double feature, going behind the scenes on two of their most ambitious projects – the wrapping of the coastline at Little Bay in Sydney and Surrounded Islands (1983) on Biscayne Bay in Florida,” Arrowsmith-Todd said.

“Artist duo Gilbert & George explore the bleak urban surrounds of 1980s London in the self-directed The world of Gilbert & George (1981). Powerfully evoking the desires and tensions of the city’s disillusioned youth alongside their own eccentricities; church spires and city streets, dancing and tea drinking all take on an affecting symbolism when viewed from the pair’s unique perspective.

“Fans of the fearless and outrageous Marina Abramović will be able to follow the artist as she prepares for what may be the most important moment of her life – a major retrospective of her work at the Museum of Modern Art – in the documentary The artist is present (2012).

“The film series concludes with the poignant 1395 days without red (2011), directed by recent Kaldor Public Art Projects alumnus Anri Sala in collaboration with Liria Bégéja, which draws on the experience of the siege of Sarajevo between 1992 and 1996,” Arrowsmith-Todd added.

Spotlight on Kaldor artists will be screened in the Art Gallery of NSW Domain Theatre during September 2019, as part of Making art public: 50 years of Kaldor Public Art Projects.

Exclusive screenings of Bill Viola’s powerful and haunting video works Fire Woman and Tristan’s Ascension will be on view at the Art Gallery of NSW for one day only to mark the opening of the exhibition Making art public: 50 years of Kaldor Public Art Projects.

Both works were originally shown as part of Kaldor Public Art Project 17 at St. Saviour’s Church, Redfern, in 2008 and again for Project 21 at St. Carthage’s Church, Melbourne, in 2010.

Bill Viola has been experimenting with video art since the early 1970s and has been instrumental in its development as a major contemporary art form. Exploring universal spiritual themes, Fire Woman and Tristan’s Ascension are moving examples of his unique approach to video art.

Originally commissioned for a Los Angeles Philharmonic presentation of Wagner’s epic nineteenth-century opera Tristan and Isolde, in collaboration with director Peter Sellars and conductor Esa-Pekka Salonen; the two videos works, Fire Woman and Tristan’s Ascension, were created for the opera’s final act, in which the lovers are united in death.

The Bill Viola video works will be screened together in the Art Gallery of NSW Domain Theatre on Saturday 7 September, from 11am – 3pm, on the hour and half-hour.

Screening on the second Sunday of each month throughout the exhibition, the movie marathon series will showcase the vast array of cinematic material on Kaldor Public Art Projects artists.

Featuring over 20 hours of film and video, both about and by the artists, and including rarely seen behind-the-scenes footage, the series offers insights into some of the world’s most exciting contemporary artists.

The movie marathon series launches in September with a program of documentaries on Christo and Jeanne-Claude, tracing the artists’ decades-long collaboration and the monumental challenges of realising their iconic works Wrapped Reichstag 1995, Valley Curtain 1972, and The Gates 2005.

In October, the series highlights one of contemporary art’s most enigmatic and controversial figures, Jeff Koons, through a range of documentaries and rare footage from his much-loved 1995 Kaldor Public Art Project, Puppy.

The movie marathon series is curated by Tait de Lorenzo, education and public programs coordinator at Kaldor Public Art Projects. Sessions will run on the second Sunday of each month until the close of the exhibition, with programs featuring artists Marina Abramović, Bill Viola, Nam June Paik and Charlotte Moorman and Gilbert & George.

The movie marathon series will screen every second Sunday of the month, from September 2019 until February 2020, in the Art Gallery of NSW Centenary Auditorium, as part of Making art public: 50 years of Kaldor Public Art Projects.

Presented in association with