Masters of modern art from the Hermitage 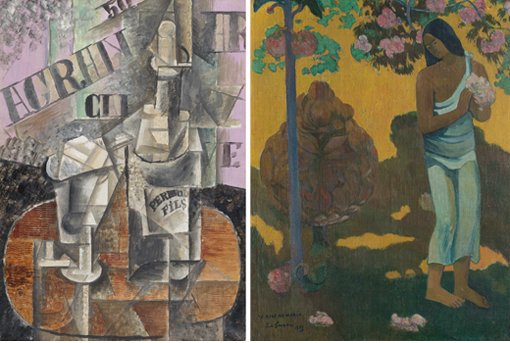 Capturing the ebullience, idealism and confidence of the European modern masters in the late 19th century and early years of the 20th century – among them Monet, Cézanne, Matisse, Picasso and Gauguin, and their equally celebrated Russian contemporaries Kandinsky and Malevich – are 65 paintings travelling to the Art Gallery of New South Wales from the State Hermitage Museum in St Petersburg for the Sydney International Art Series exhibition, Masters of modern art from the Hermitage.

Significant works in the exhibition include Monet’s Poppy field c1890; Cézanne’s Great pine near Aix, 1895/97; Picasso’s Table in a Cafe, 1912; Gauguin’s Month of Mary 1899; Matisse’s Nymph and Satyr 1908; Kandinsky’s Landscape near Dünaberg 1913 and Malevich’s Black Square c.1932, all of which are from the Hermitage’s illustrious modern collection, now housed in the renovated General Staff Building across Palace Square from the Winter Palace, one of the most famous architectural monuments in St Petersburg.

The Hermitage State Art Museum director, Professor Mikhail Piotrovsky, said every Hermitage exhibition has charm and meaning which lie in that it says as much about the museum overall as it does about the particular slice of cultural history that is its subject.

“The Hermitage continues to create its own map of modern art, art which is in fact an inseparable part of its tradition, part of its DNA. And there is nothing unusual in us having a collection of modern art. For was not contemporary art collected by Catherine the Great, by Nicholas the First and by Alexander the Third?” Piotrovsky said.

Art Gallery of New South Wales director, Dr Michael Brand, a member of the International Advisory Board of the State Hermitage Museum since 2009, said the Gallery is honoured to be exhibiting 65 of the Hermitage Museum’s remarkable modern masters, exclusively in Sydney.

“I thank my esteemed colleague, Professor Piotrovsky, and all our colleagues at the Hermitage for partnering with us to provide Australians, and visitors to Australia, the opportunity to experience the brilliant colour and form of the European and Russian modernists,” Dr Brand said.

“The ground-breaking work of the modern masters, as they freed themselves from tradition and imagined art and life in new ways, is relevant today as innovation, unrestricted creativity and fresh perspectives on life, politics and culture remain of interest to us all,” Dr Brand said.

AGNSW senior curator of historical European art, Peter Raissis, said the work of the great agents of modernism in painting in the early 20th century represents one of the most striking progressive movements in the history of western art.

Raissis says the exhibition, developed and curated by the Hermitage’s Department of Western European Fine Art deputy director Dr Mikhail Dedinkin, and senior curator Dr Albert Kostenevich, explores the seismic shift from a realistic, imitative art based on the perceptual exploration of the external world, to a more subjectivist, abstract art concerned with inner worlds.

'Don’t copy nature too closely’, advised Gauguin, ‘all art is an abstraction.’

“The artists represented in the exhibition discovered that painting had its own autonomous meaning – that colour, line, shape, tone, spaciality, symmetry or asymmetry, and the urgency of pure expression could be themes in, and of, themselves,” Raissis said.

Masters of modern art from the Hermitage also tells the story of the Russian collectors Sergey Shchukin and Ivan Morozov, both wealthy businessmen who first championed the ground-breaking works of the French modern masters, and brought their work together with great passion.

Shchukin, one of the most visionary art collectors of the 20th century, assembled a singular collection of the most radical French art of the day, opening his residence to the public so local art students, such as Malevich, could study the major works of European painters.

“As Shchukin’s collection was on public display, it played a significant role in shaping the birth of the Russian avant-garde,” Raissis said.

Over two thirds of the works in the exhibition are from the collections of Shchukin and Morozov, and archival photographs show how some of the works were displayed by Shchukin in his Trubetskoy Palace in Moscow, where Russian art lovers, intellectuals and artists were welcomed.

An immersive video installation by Saskia Boddeke and famous British filmmaker Peter Greenaway is another highlight of the exhibition. Launched in Europe at the Fondation Louis Vuitton last year, the installation, restaged for AGNSW, engages visitors in an extraordinary dialogue between Shchukin and Matisse and highlights the impact of the works of Matisse on young Russian artists.

The exhibition concludes with works by the Russian artists Kandinsky and Malevich, who were not only highly receptive to the influence of modern French painting, but whose art was shaped by its radical possibilities.

NSW Minister for the Arts Don Harwin said the exhibition is presented as part of the Sydney International Art Series – an annual event created by the NSW Government’s tourism and major events agency, Destination NSW, which brings the world’s most outstanding artists and their works exclusively to Sydney at the Art Gallery of NSW and Museum of Contemporary Art (MCA).

“The Sydney International Art Series is a major visitor drawcard for our State. Since its inception in 2010, the annual exhibitions at the Art Gallery of NSW and MCA have generated more than $134 million in overnight visitor expenditure for NSW and attracted more than 1.8 million attendees,” Mr Harwin said.

Masters of modern art from the Hermitage is supported by the Australian Government International Exhibitions Insurance (AGIEI) Program. This program provides funding for the purchase of insurance for significant cultural exhibitions. Without AGIEI, the high cost of insuring significant cultural items would prohibit this major exhibition from touring to Australia.

About the State Hermitage Museum

The State Hermitage Museum is one of the greatest art museums in the world, revered as a treasury and refuge for art. Its collections feature the art and culture of Antiquity, Western Europe, Asian countries and Russia.

Highlights of the museum include works by the most famous European old masters — Leonardo da Vinci, Raphael, Titian, Rembrandt and Rubens, and French paintings from the 19th and 20th centuries. The Hermitage’s decorative art collection is also one of the richest in the world.

The history of the Hermitage as a museum collection began in 1764 when Catherine the Great, one of the greatest collectors of all time, acquired some of the most significant art collections of her day.

The museum complex occupies ten buildings, including the Winter Palace, which form a brilliant architectural ensemble on both sides of the Palace Square, including the renovated General Staff Building with its modern interiors which house the Hermitage’s French paintings of the 19th and 20th centuries.

About the Sydney International Art Series

The Sydney International Art Series is an event created by the NSW Government’s tourism and major events agency, Destination NSW, in collaboration with the Art Gallery of New South Wales and Museum of Contemporary Art, which brings the world’s most outstanding artists and their works exclusively to Sydney annually at the two galleries.