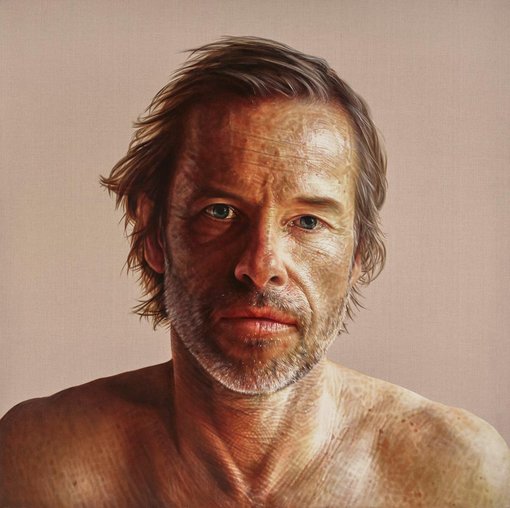 First time finalist in the Archibald Prize Anne Middleton has taken out the 2018 ANZ People’s Choice award with her portrait of Australian actor, Guy Pearce.

The Melbourne artist’s portrait Guy is her first venture into large-scale portraiture. Middleton said she was intrigued by the depth of emotion in Pearce’s face and wanted to take on the challenge of painting him.

“The entire process of painting this portrait was both daunting and exciting. Guy and I talked about the qualities of tin-type photography and discussed how we could capture a similar sensation of peering into his soul. The scale of the painting was liberating, and I could paint loosely and expressively despite the level of detail.”

Pearce visited Middleton’s studio to sit for the portrait on weekends while filming in Melbourne. Middleton drew upon her knowledge of European oil painting techniques from the 17th and 18th centuries to build layers of luminous colour and form.

“I painted Guy in the natural light of my studio. The light rakes across his face, casting one side of his face into deep shadow. Obscure and mysterious, it speaks of hidden and difficult times. The other side is brilliantly lit, highlighting the delicacy, transparency and vulnerability of his skin, and the subtle and tender quality of his eyes and mouth. It is an uncompromising light, honest and unflinching.

“This extreme tonality enabled me to explore the chameleon nature of Guy Pearce – a profound personal awareness of the light and dark that makes him both an extraordinary actor and a kind, funny and unassuming bloke,” said Middleton.

From Amsterdam Guy Pearce was delighted to hear the news that the portrait had won the award and he sent his warm congratulations to Anne Middleton.

Also congratulating Middleton on her win, Art Gallery of New South Wales Director Michael Brand said, “The ANZ People’s Choice award encourages everyone to have their say about portraiture.

The Archibald Prize People’s Choice was first awarded in 1988 – now supported by presenting partner ANZ – and this year over 20,000 visitors to the 2018 Archibald, Wynne and Sulman Prizes have had their say with over 10,500 visitors providing written comments about their favourite work.

This year, the lucky voter is Susanne Wheelahan, who receives a $2000 cash prize from ANZ.

“Anne Middleton’s portrait of Guy is outstanding. I love how she has captured his eyes and revealed so much character in his face,” Wheelahan said.

ANZ Group Executive Australia Fred Ohlsson said, “Congratulations to Anne Middleton on winning the ANZ People’s Choice Award. It is incredible to see the widespread interest the Archibald Prize continues to generate among the community, and ANZ is honoured to be supporting this award for the ninth year.

“I am extremely excited that the 2018 exhibition will now expand its audience further as it commences its tour of regional Victoria and New South Wales,” Ohlsson said.

The winning portrait and finalist works for the 2018 Archibald, Wynne and Sulman Prizes are on show at the Art Gallery of New South Wales until Sunday 9 September. Archibald Prize finalists will then go on a regional tour until June 2019.