Renaissance to Goya: prints and drawings from Spain 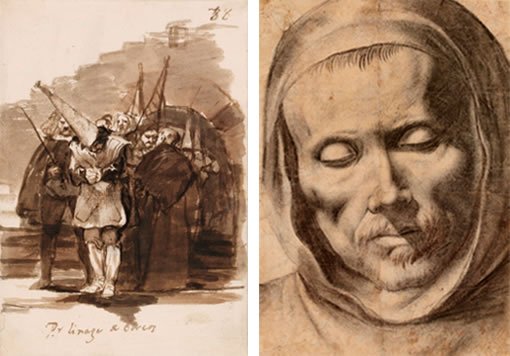 This exhibition presents over 130 exceptional prints and drawings from the British Museum, which holds one of the finest collections of Spanish graphic art in the world. The Art Gallery of NSW in Sydney is the only Australian venue in an international tour – which included the Prado in Madrid.

Spanish prints and drawings are little known outside Spain, and it is generally assumed that these were marginal arts practised by few artists. The study and appreciation of Spanish old master prints and drawings has also lagged behind that of other European schools. This timely exhibition offers a compelling re-evaluation, highlighting the exceptional quality and diversity of the graphic arts across the various distinctive regions of Spain.

Arranged chronologically and by region, the exhibition provides the viewer with a detailed and rich panorama of over 250 years of graphic production, from the mid 16th century to the early 19th century. The exhibition also demonstrates how the art of drawing in particular was nourished and stimulated by the cultural links Spain enjoyed with other European countries, while retaining an unmistakably Spanish character.

The exhibition opens with works by Renaissance artists working in and around Madrid at the time when the city was designated as the new capital. This section includes important drawings by Alonso Berruguete, and the Italian Pellegrino Tibaldi who was working on the decoration of Philip II’s monastery at El Escorial.

A large component of the exhibition is devoted to the Golden Age of Spanish drawing. 17th-century Madrid is represented by artists such as Vincente Carducho, Francisco Camilo, Alonso Cano and Francisco Rizi. Drawings in this period were executed in a variety of techniques and served many purposes – a testament to the increasing importance of the role of drawing in artistic creation. Moving through the exhibition to 17th-century Seville (where commissions came mainly from the church and private patrons rather than the court) the viewer will encounter beautiful works by such celebrated figures as Francisco de Zurbarán and Bartolomé Esteban Murillo. Although Diego Velázquez trained in Seville, he went on to have a brilliant career in the capital, while José de Ribera – one of the outstanding draughtsmen and printmakers of his time – left his native Valencia to spend most of his career in (Spanish) Naples.

The exhibition culminates with the dominating figure of 18th-century Spanish art, Francisco de Goya, an artist richly represented in the British Museum collections. The exhibition offers a rare opportunity to view a broad spectrum of Goya’s extraordinary prints and drawings in relation to those of his forerunners and contemporaries working in Madrid during the 18th and early 19th centuries. Printmaking and drawing greatly increased during this period, forever changing the artistic landscape of Spain.

An accompanying catalogue has been published by the British Museum Press. Written by Mark McDonald, the curator of Renaissance to Goya: prints and drawings from Spain, it is a beautiful and comprehensive publication that examines for the first time the rich history of more than 400 years of drawing and printmaking in Spain.

British Museum colleagues present talks in Sydney
Mark McDonald, Curator Prints and Drawings in Sydney from 21 August.
Joanna Mackle, Deputy Director in Sydney from 30 August to open the exhibition and be part of a public discussion with Richard Morecroft, former ABC presenter about museums and audience engagement.