Celebrates 40 years of innovation within tradition 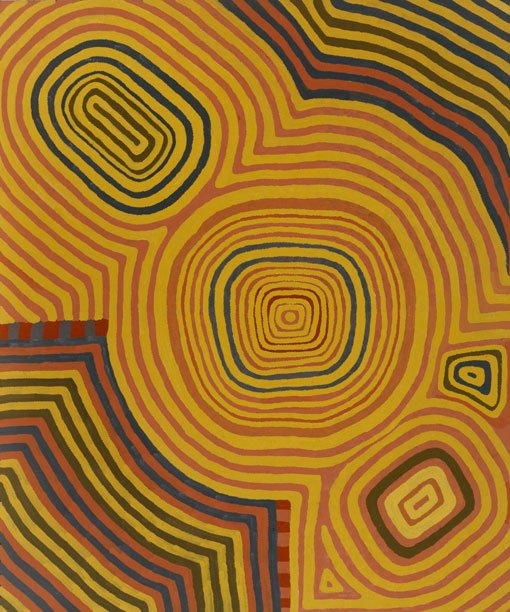 The Art Gallery of New South Wales is delighted to present an exhibition to celebrate the 40-year career of one of Australia’s leading Aboriginal artists, Ronnie Tjampitjinpa.

Opening on 4 April and running until 1 November 2015, the exhibition features major paintings and prints from the Gallery’s collection – including the seminal acquisition Tingari dreaming at Wilkinkarra 2008 – as well as works from significant private collections.

Tracing the development of Tjampitjinpa’s practice, the exhibition showcases Tjampitjinpa’s unique contribution to Australian art. It features his early paintings that are marked by classic Tingari iconography and subtle colouration, alongside his more recent vivid, optical works that pulsate with energy.

Pintupi artist Tjampitjinpa was one of the youngest men to begin painting at Papunya in 1971 and one of the founders of the hugely influential Papunya Tula Artists group. Under the tutelage of luminary artist Uta Uta Tjangala, and with the encouragement of school teacher Geoffrey Bardon, Tjampitjinpa shared stories of his distant homelands through his artworks.

The travels of the Tingari – a group who travelled over vast stretches of the Western Desert – form the basis of Tjampitjinpa’s work. His art offers evolving interpretations of the Tingari, whilst adhering to their codes of reference. Tjampitjinpa himself spent his early years travelling this country, obtaining intimate knowledge of the landscape.

Cara Pinchbeck, curator of Aboriginal and Torres Strait Islander art, Art Gallery of NSW, said: 'Tjampitjinpa has offered constant innovation within the traditions of Pintupi visual language. His controlled use of colour, strong contrast and defined line-work ensure his works are optically charged. He also captures the dynamism and intensity of those who shaped country and continue to inform landscape in the present.’

In the 1970s, Tjampitjinpa was heavily involved in the outstation movement, advocating for the return of the Pintupi to their homelands in the Western Desert. Once this was achieved, with the establishment of Walungurru (Kintore) in the early 1980s, Tjampitjinpa began to focus upon his artistic practice. By the early 1990s he was a highly acclaimed painter, most recognised for the bold, graphic qualities of his artwork.

Tjampitjinpa has received a number of awards, including the 1988 Alice Prize. His first solo exhibition was held at Gallery Gabriella Pizzi, Melbourne, in 1989, and his work was included in Dreaming at the Asia Society Gallery, New York in 1988 and Australian Perspecta in 1993.