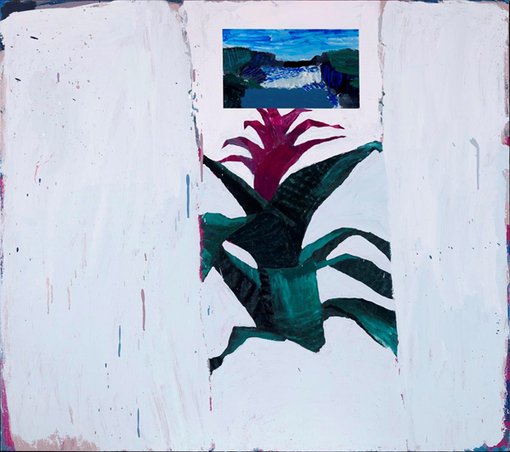 Sally Anderson Dilling’s Bromeliad with Gullfoss Falls 2016, acrylic on board. Courtesy of the artist and Edwina Corlette Gallery, Brisbane

A national painting prize awarded annually to a young Australian artist, the scholarship includes a three-month residency at the Cité Internationale des Arts in Paris and funding to further the recipients’ art education while in Europe. This year the Brett Whiteley Foundation has increased the prize by an additional $10,000 to $40,000 from $30,000 in previous years, for additional travel in Europe.

Anderson’s work reflects her ongoing interest in emotional responses to memory and experience. Her multi-layered paintings use pairings of object and place to present ways in which meaning is assumed and formed through context and association. In 2014 Anderson was invited to participate in the Association of Icelandic Visual Artists residency in Reykjavik, Iceland. Dilling’s Bromeliads with Gullfoss Falls (2016) references her time in Iceland.

The guest judge, Australian painter Ildiko Kovacs, said Anderson’s work had made an instant impact on her during the judging process.

“What drew me immediately into Sally’s work is the freedom and clarity in her use of paint. Beautiful areas of abstracted shapes, alongside her use of the figurative, sit comfortably and feel coherent. There is a naturalness in her ability to marry the two,” Kovacs said.

“I feel Sally would greatly benefit from travelling to Europe being saturated in its art history and culture. The Brett Whiteley Travelling Art Scholarship is a wonderful gift to help further her visual language and ultimately strengthen her as a painter with perspective to her own environment,” Kovacs added.

Art Gallery of New South Wales director Dr Michael Brand, who today congratulatred Anderson, said that after 19 years the scholarship had established itself as a roll call of some of Australia’s most talented young artists.

“Sally Anderson is the 19th young Australian artist to be awarded the Brett Whiteley Travelling Art Scholarship. It is one of the most enriching experiences available to our young artists and Sally will join an alumni of past recipients recipients that include this year’s Archibald Prize winner Mitch Cairns as well as Tom Polo and Ben Quilty,” Brand said.

The Brett Whiteley Travelling Art Scholarship provides a young Australian painter the opportunity to spend a three month residency at one of the Art Gallery of NSW’s studios at Cité Internationale des Arts in Paris. The annual scholarship also awards the recipient $40,000 to further their art education while in Europe.

About the Brett Whiteley Studio

Brett and Wendy Whiteley first bought the former Surry Hills warehouse in 1985, converting it into a studio and exhibition space where Brett lived and worked from 1988 until his death in 1992. The space opened to the public in 1995, two years after it was purchased by the NSW Government.

The Brett Whiteley Studio offers visitors the unique opportunity to experience the atmosphere of the artist’s working space, with paintings, art materials, Whiteley’s collection of art books and objects that inspired him, alongside the graffiti wall covered with his quotes and images.

The Studio is managed and owned by the Art Gallery of NSW. Free admission is made possible by J.P. Morgan, principal sponsor of the Brett Whiteley Studio.