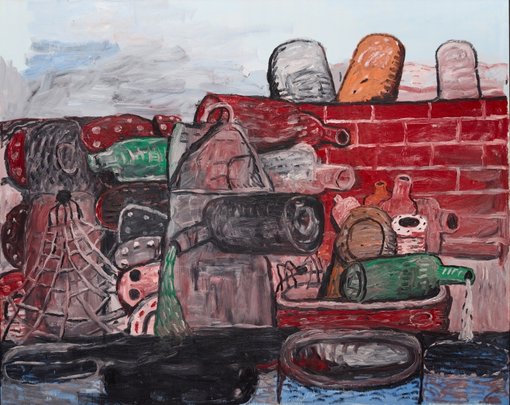 Since its founding in 1871, the Art Gallery of New South Wales has collected art from around the world, alongside its deep commitment to Australian art. Questions of what and how the Gallery collects works of art underpins this free exhibition of highlights from its international contemporary art collection, all acquired over the past 50 years.

Some Mysterious Process: 50 Years of Collecting International Art weaves together multiple threads of history to tell the story of how the international contemporary collection has come together — through the alchemy of planning and serendipity, curation and philanthropy, and the evolution of societal expectations.

Curated by director Michael Brand, the exhibition is the first he’s curated since he arrived at the Gallery in 2012.

“While our doors were closed to the public due to COVID-19 restrictions, my silver lining was to install Some Mysterious Process which was originally scheduled to open in April,” Brand said.

The title, Some Mysterious Process, is a quote from American artist Philip Guston, who, when asked about making art said: ‘There’s some mysterious process at work here which I don’t even want to understand.’

“Every art collection has to start somewhere. Sometimes the first steps are tentative and give little clue as to how the collection will eventually mature. Strategic decisions present themselves at each stage: an art museum might collect an artist at the height of their renown, and pay a premium, or collect an artist as their career begins to take off, and risk the work losing its relevance if that career does not meet its initial potential. Each collection will have different motives and different possibilities,” Brand said.

Works in the exhibition have come into the Gallery’s collection over the past four decades under the auspices of different curators and directors. Many of the artworks featured in the exhibition were acquired with funds provided by the Art Gallery of New South Wales Foundation. Established in 1983 with the mission of attaining significant works of art for the collection, the Foundation is the Gallery’s single largest source of acquisition funds.

“By investing donations and bequests, the Foundation provides essential funds to support the purchase of major works of art, including masterpieces by artists such as Louise Bourgeois, David Hockney and Gerhard Richter that would otherwise be unachievable. To date, the Foundation has supported the acquisition of 43 works of art, ten of which can be experienced and enjoyed in this exhibition,” Brand said.

“In some instances, further assistance was provided through the generosity of other philanthropic supporters who firmly believe that our audiences should have the opportunity to engage with the best of contemporary art from around the world,” Brand added.

A major catalyst for the Gallery’s building of its collection of contemporary international art was the hosting in 1967 of the exhibition Two decades of American painting from the Museum of Modern Art in New York. Paintings in the Some Mysterious Process exhibition by Joseph Albers and Morris Louis were purchased from that exhibition.

This starting point for the exhibition lies in the immediate wake of the student-led protests and political assassinations that rocked the world in 1968 and, more positively, the first manned landing on the moon in 1969. Extraordinary events in the Australian art world made Sydney more receptive international contemporary art.

However, one of the most persistent blind spots in the art world at this time was the lack of appropriate representation of women artists, and few works by women artists entered the collection in the 1970s. Brand says the purchase of Bridget Riley’s Aurum in 1976 was a ‘pleasing exception’.

Brand said an attempt to redress this gender imbalance has been one of the key goals of his tenure as director. In 2015 the Gallery’s international art acquisition policy was changed to include an emphasis on redressing this imbalance.

“Approximately 40 per cent of works in this exhibition are by women artists, which reflects the progress that has been made but also highlights the reality of a collection built over so many years when the achievements of women artists were not paid the attention they deserved,” Brand said.

The emergence of pop art in the early 1960s saw a new generation of artists embracing the imagery and energy of the world of advertising, film and popular music. While American artists such as Andy Warhol and Roy Lichtenstein were particularly prominent, pop was a truly international phenomenon. Brand says this was an area, however, where the Gallery decided not to duplicate what the National Gallery of Australia collected ‘so brilliantly under their late director, James Mollison.’

Some Mysterious Process includes a selection of works by pioneers of American pop art that are in the Gallery’s collection, including Andy Warhol, Roy Lichtenstein and Ed Ruscha, together with a recently acquired series of prints by Corita Kent, a Los Angeles-based former nun, teacher and social activist. A print by Japanese artist Ay-O points to the broader global influence of pop art, while later works by Jeff Koons and Gilbert & George demonstrate the ongoing impact and legacy of the movement.

Despite their cultural and geographical differences, a number of artists in the exhibition explore universal themes of love, loss and faith against the framework of memory – both individual and collective. Tracey Emin, Mernet Larsen and Zhang Xiaogang refer to past events, family histories and old photographs in works that allude to complex personal narratives.

American minimal art, a strength of the Gallery’s collection thanks to the gift of major works by John Kaldor in 2011, is represented in the exhibition by an important painting by Frank Stella. Brand has positioned the work in a room that celebrates a contemplative and understated visual language across a variety of media. Often employing repetition and geometry, and exploring ideas of presence and absence, these works reveal sympathies between artists across time and space.

While it is not feasible for a collection of international contemporary art to be fully comprehensive, the art displayed in the final spaces of the Some Mysterious Process exhibition show how the Gallery’s collection has continued to expand its reach in the past decade, guided by new policies and priorities.

There are works from Africa, South Asia and Southeast Asia, as well as Europe and the United States. The Gallery has also sought to balance scale in its international collection, an example being the modestly sized ceramic assemblages of Lubna Chowdhary, acquired after Brand saw them last year at Art Basel Hong Kong.

Brand said the exhibition has provided an opportunity for deep thinking about future collecting as the Gallery looks ahead to the completion of the Sydney Modern Project in 2022 with its significant new spaces.

“A focus will be site-specific commissions for the new building designed by Pritzker Prize-winning architects SANAA, and for outdoor spaces within the expanded art museum. We’re thinking about how we provide audiences better access to the masterpieces in our collection, and about our future collecting.

“We’re asking ourselves many questions. What are our collection’s strengths and how should we build on them? How can we address its blind spots? What kind of collection do we want to leave future generations? Artworks are the heart and soul of this public art museum, and this will always be so,” Brand said.