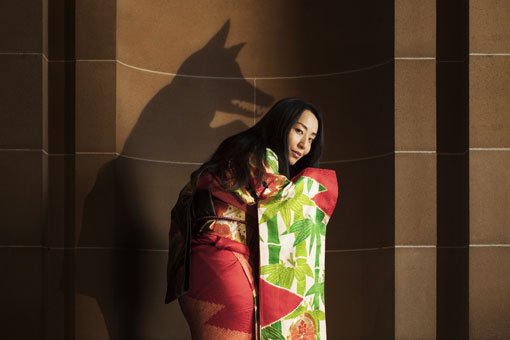 A headless spook? What in the world comes after me! Looking back, a long-neck is terrified to see…herself. – Kyoka Hyakumonogatari (1853)

In Japanese folklore, twilight is the time when the supernatural world awakens, everyday objects become enchanted, and shapeshifters and trickster spirits take to the streets.

This summer at the Art Gallery of New South Wales the major exhibition Japan supernatural comes alive as Clockfire Theatre Company and composer Eiko Ishibashi thread performance and music among the art in this world premiere production of Night parade of one hundred goblins for Sydney Festival 2020.

Each night as the sun sets on the Gallery, Clockfire Theatre Company’s Night parade of one hundred goblins emerges in the Entrance Court among artist Kentaro Yoshida’s manga-influenced murals. Drawing inspiration from Toriyama Seiken’s and Hiroharu Itaya’s exquisitely rendered scrolls, the surreal and highly physical performance is a fantastical live procession of supernatural beings – including a kitsune (a masterful and murderous shapeshifting fox), tanuki (a mischief-making trickster racoon-dog) and kappa (a water sprite) – propelled by the live taiko drumming of multi-instrumentalist Masae Ikegawa.

The performance continues in the lantern-lit world of the exhibition Japan supernatural, featuring works by artists such as Katsushika Hokusai and Takashi Murakami, with a newly-commissioned soundtrack composed by Tokyo-based musician Eiko Ishibashi (fresh from Dark Mofo) and the murmurings of kyōka (Japanese ‘mad poetry’) by Kyoka Hyakumonogatari, Yomo no akara and Ryokan Taigu.

Night parade of one hundred goblins is the latest in a series of innovative theatre experiences from Clockfire Theatre Company, whose works include The Natural Conservatorium of Wise Women (Sydney Fringe Festival, 2019) and The Grief Parlour (Riverside Theatres, Parramatta). The theatre ensemble incorporates the skills of artists from an array of disciplines in a highly physical and collaborative approach that is heavily influenced by the Jacques Lecoq Theatre School in Paris.

Co-presented by the Art Gallery of NSW, Sydney Festival and Clockfire Theatre Company. The performance is made possible by the generous support of Gandel Foundation, Carole Lamerton, Kiera Grant, Robyn Martin-Weber.