Today the 2014-15 Sydney International Art Series was launched – a signature event on the Sydney and NSW Events calendar; bringing the world’s most outstanding exhibitions to Australia.

Pop to popism will run from 1 November 2014 to 1 March 2015 at the Art Gallery of New South Wales, and will be shown in conjunction with Chuck Close: prints, process and collaboration at the Museum of Contemporary Art Australia from 20 November 2014 to 15 March 2015, as part of the Sydney International Art Series.

Pop to popism is one of the most ambitious exhibitions undertaken by the Art Gallery of New South Wales. Some 200 works by 70 of pop’s greatest artists will be presented across an entire floor, many shown in Australia for the first time. Artists include Peter Blake, Niki de Saint Phalle, Richard Hamilton, David Hockney, Roy Lichtenstein, Martha Rosler, Ed Ruscha, Martin Sharp, Andy Warhol and Brett Whiteley.

'This will be the most comprehensive survey of pop art to be seen in Australia and reflects the decisive role played by pop in the development of contemporary art,’ said Art Gallery of New South Wales director, Michael Brand. ‘The exhibition will present Australian pop artists alongside their international peers from the United States, the United Kingdom, and Europe and extends beyond the period of classic pop art into the eighties, giving audiences an insight into pop’s enduring legacy both here and abroad.’

Tickets for the exhibitions in the series are now on sale. A special Sydney International Art Pass is also available, providing discounted entry to both exhibitions.

Skip the queues and buy online

Tickets also available at the venues when the exhibitions open. Tickets are undated and untimed. 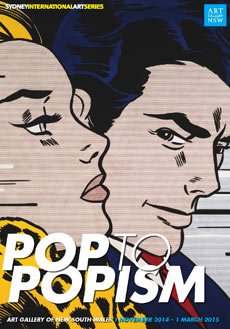