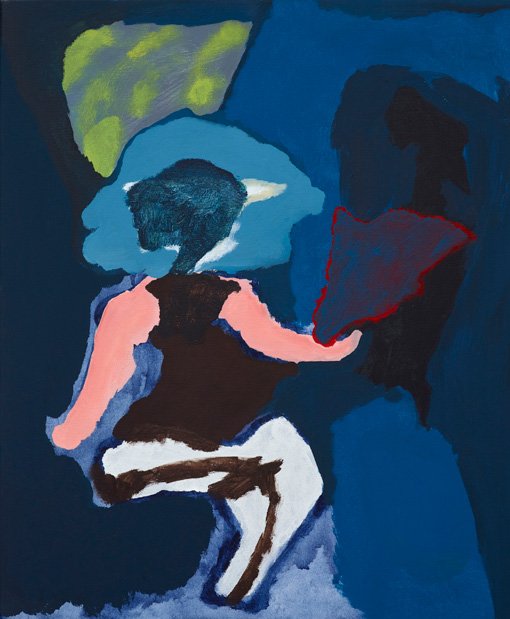 The Brett Whiteley Travelling Art Scholarship provides a young Australian painter the opportunity to spend a three month residency at one of the Art Gallery of NSW’s studios at Cité Internationale des Arts in Paris, and up to a further three months travelling throughout Europe to further their art education. The annual scholarship awards the recipient with a stipend – this year valued at $30,000 – to support living and travel expenses while in Europe.

Art Gallery of New South Wales deputy director Suhanya Raffel said the Gallery was most appreciative of the generosity of the Brett Whiteley Foundation in providing this prestigious and significant scholarship.

“It is of great importance that the Gallery, as one of Australia’s leading art museums, actively fosters the careers of young Australian artists. The Brett Whiteley Travelling Art Scholarship has supported the creative development of many exciting and talented artists – including Tom Polo this year,” Raffel said.

“Playing a significant role in the ongoing success of this scholarship, and of the Brett Whiteley Studio, now officially part of the Gallery, is Wendy Whiteley and the Gallery is very grateful for Wendy’s steadfast contribution in assisting us to continue Brett’s legacy for future generations of Australian artists and art lovers,” Raffel added.

Lowry said she was drawn to the poetical nature of Polo’s paintings and is excited to see how his practice develops after his time in Paris.

“Tom’s work illuminates anxieties and failures in a most beautiful way. His practice is well developed and he has a deep knowledge of what he wants to talk about as an artist. This direction and understanding will only grow further through spending time in the cultural melting pot that is Paris,” Lowry said.

“I have no doubt that embarking on this wonderful opportunity at this point in his life, Tom will see his career go from strength to strength,” Lowry added.

Polo said it is a surprise and great honour to be awarded the 2015 Brett Whiteley Travelling Art Scholarship, after being a finalist in both 2012 and 2013.

“This scholarship will afford me dedicated time and space to focus on my practice and its development, while surrounded by the wealth of culture and influence Paris offers. I look forward to undertaking research at some of France’s most significant collections and galleries and it’s exciting that I’ll have the opportunity to extend this to the rest of Europe after my residency, too,” Polo said.

“I am deeply thankful to the Brett Whiteley Foundation for their generosity and to Wendy Whiteley for her continued support of the scholarship, which, at a time when artists need the most support, is a real privilege,” Polo added.

The painting All she needs from Polo’s winning body of work is currently on display at the Brett Whiteley Studio until 13 September 2015, alongside works by finalists Jordan Richardson (highly commended), Clara Adolphs, Sally Anderson, Natasha Bieniek (also winner of the 2015 Wynne Prize), Annalisa Ferraris and Matilda Julian.

About Tom Polo
Tom Polo (b1985) lives and works in western Sydney. He holds a Bachelor of Fine Arts (Hons Class 1) and Master of Fine Arts from the College of Fine Arts, UNSW. Since 2007, he has exhibited in solo and group exhibitions in Australia and the United Kingdom. In 2007, Polo was an inaugural recipient of the Parramatta Artists’ Studios residency, where he periodically developed much of his practice until 2014.

In 2014 Polo was named the winner of the Redlands Konica Minolta Emerging Art Prize and, in 2011, he was the recipient of the Art & Australia / Credit Suisse Private Banking Contemporary Art Award. He has been a finalist in the Fishers Ghost Art Award, the QANTAS Soya Award, The Blake Prize, the Helen Lempriere Travelling Art Scholarship and the Brett Whiteley Travelling Art Scholarship. Polo has undertaken residencies at Queen Street Studios, Parramatta Artists Studios, The Lockup Cultural Centre, Newcastle and the Australia Council’s London Studio.

About the Brett Whiteley Studio
Brett and Wendy Whiteley first bought the former Surry Hills warehouse in 1985, converting it into a studio and exhibition space where Brett lived and worked from 1988 until his death in 1992. The space opened to the public in 1995, two years after it was purchased by the NSW Government. For 20 years, the Studio was managed by the Art Gallery of NSW. In February 2015, it was announced that the Studio had officially come under Gallery ownership.

The Brett Whiteley Studio offers visitors the unique opportunity to experience the atmosphere of the artist’s working space, with Brett Whiteley’s paintings, art materials, collection of art books and objects that inspired him, alongside the graffiti wall covered with quotes and images.

Free admission is made possible by J.P. Morgan, principal sponsor of the Brett Whiteley Studio.