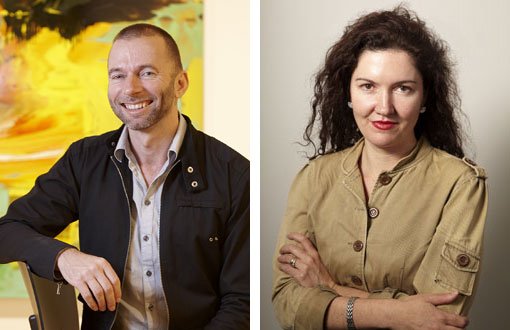 'I am delighted to announce these appointments. I have worked with Wayne for 14 years and know he will bring a wealth of knowledge, commitment and passion to his new position. Kirsten comes to us from the National Gallery of Australia where she was responsible for marketing some of the NGA’s most successful exhibitions,’ said Edmund Capon.

Wayne Tunnicliffe has curated the contemporary Australian collection at the gallery since 2001 and has been responsible for some of the Gallery’s most significant acquisitions by living artists.

Some of Wayne’s recent exhibitions and publications for the Gallery include The John Kaldor Family Collection, Wilderness, Tim Johnson: painting ideas, Ângela Ferreira and Narelle Jubelin, Adam Cullen: let’s get lost, An incomplete world, Adventures with form in space, Contemporary: AGNSW contemporary collection, and exhibitions by Robert Owen, Tracey Emin and Simryn Gill. He is also the co-curator of over 70 Contemporary Project Space exhibitions.

Hetti Perkins is Head Curator of Aboriginal and Torres Strait Islander Art and her area will now be a separate department.

Kirsten Downie has a wealth of experience in marketing, communications and business development in the cultural sector. Prior to joining the Art Gallery of New South Wales, Kirsten was at the National Gallery of Australia as Head of Marketing and Communications. Kirsten led the strategic marketing, media relations and tourism campaign for the highest visited art exhibition in Australian history, Masterpieces from Paris: van Gogh, Gauguin, Cezanne and beyond with over 470,000 visitors.

Kirsten was also involved in re-launching the National Gallery of Australia’s brand and visual identity in line with the opening of the new ‘stage one’ building, the most substantial development to the gallery since it opened in 1982. Kirsten devised the national marketing and publicity campaign to launch the NGA’s 11 new Australian Indigenous art galleries in 2010.

During her time at the NGA, Kirsten won two Tourism awards and two Australian Hotels Association awards for exhibition marketing.