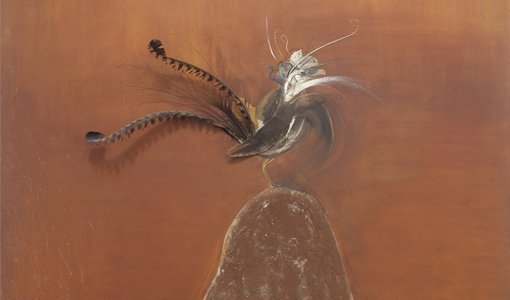 Anything that is beautiful is a unique mixture of abstraction, realism and expressionism: if one is neglected or overdone, if one is not considered in the light of the other, if in fact the three forces are not felt as one, in one brilliant flash of a glimpse – inspiration will be missing, and eventually meaning – Brett Whiteley

Landscape was a constant theme throughout Whiteley’s artistic practice, whether in intimate studies or large poetic paintings. He immersed himself in both urban and rural landscapes from his early years.

Brett Whiteley redefined the way the Australian landscape is seen and became one of our most celebrated 20th-century painters with his interpretations of the countryside.

Whiteley`s early school days in Sydney and particularly boarding school in Bathurst set a foundation and intimacy with the landscape.

After a decade in Europe and America during the sixties with great success as an abstract and figurative artist, Whiteley returned to Sydney with his young family. Australia had changed whilst they were away, a culturally awakening was taking place, and in this environment Whiteley would make his mark.

Australia and its Indigenous cultures also played a significant part in Whiteley`s art along with its unique flora and fauna. His work To Yirrawalla 1972 is a tribute to Yirawala, the artist and Aboriginal elder of the Kuninjku people in Arnhem Land. Whiteley had viewed his bark paintings and met the artist in Sydney in 1971.

Whiteley was also indebted to Asian art and the landscape tradition. One of his last great large works, Autumn (near Bathurst) – Japanese Autumn 1987-88, brings all these elements together in the contemporary language of ink, charcoal, paint and collage. He fused an Asian aesthetic of perspective with a European sensibility to create a unique floating sensual landscape, with birds, nests, trees, rocks and rivers inhabiting a world founded on place and set in imagination and feeling.

His eclectic book collection in the studio holds many clues – Chinese painting and calligraphy, brush and ink drawings, Japanese, Le Japonisme (the French connection and influence on Monet, Matisse and van Gogh amongst others) Indonesian and Islamic art as well as artists such as Lloyd Rees, Bill Brandt, William Scott, Nicholas De Stael and Richard Diebenkorn. These books and artists all provide a rich contextual platform for understanding Whiteley and his art.