William Kentridge: that which we do not remember

Exhibition of work curated by William Kentridge featured at the Gallery 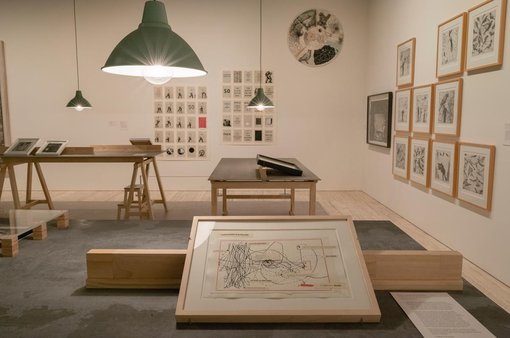 Installation view of William Kentridge: That which we do not remember on display 8 September 2018 – 3 February 2019, at the Art Gallery of New South Wales. Photo: AGNSW

The Art Gallery of New South Wales is delighted to announce an exhibition of work by William Kentridge curated by the artist, one of the most distinctive and powerful voices in contemporary art. The exhibition is designed by Sabine Theunissen who has worked together with Kentridge since 2005 for many of his theatrical and theatre-based projects.

Within this dramatically configured exhibition, That which we do not remember, Kentridge reflects on his opus by incorporating 32 works of diverse media including sculpture, film, charcoal drawings, collage, sound and tapestry – what Kentridge refers to as the “alchemy” and “transformation of materials”. At the exhibition’s core is a significant selection of artworks from the Naomi Milgrom Collection.

The exhibition highlights the nexus of art, ideology, history and memory emanating from Kentridge’s experiences of the apartheid regime in South Africa. Dramatic structure, farce, absurdity, terror, obliteration and narrative are just some of Kentridge’s preoccupations. The exhibition’s title, That which we do not remember alludes to erasure and memory, echoed in the accompanying, fully illustrated publication and revealing interview: “The primary lie of all art is that you know it is an illusion even while you fool yourself.”

Art Gallery of NSW director, Dr Michael Brand, said the exhibition is the result of the Gallery’s close collaboration with Naomi Milgrom and the artist.

“William Kentridge has conceived the exhibition to trace visual and thematic links across his practice: from his engagement with opera to his interest in early cinema, from his inimitable animated drawings to sculpture and works on paper.

“The works that comprise this magnificent exhibition create an unforgettable experience for visitors to the Gallery, and an opportunity to be immersed in the work of one of the world’s most celebrated living artists,” Dr Brand said.

This exhibition follows on from Kentridge’s critically acclaimed commission at the Tate Modern’s Turbine Hall in July 2018. Importantly, Kentridge’s private studio space is evoked within the exhibition, giving audiences rare insights into his working methods.

“In this world of illusions, there needs to be a material that one can think in quickly. This is something that I have learned through working across media, and it has informed my sculptural work. Even if a sculpture will end up in bronze, it needs to start in a material that allows for flexible, fast work,” Kentridge added.

Naomi Milgrom AO has had a longstanding fascination with the work of William Kentridge.

“I have treasured his work and friendship. I have been astounded since I first saw his colonial landscapes in charcoal and pastel, as well as his emotional film series Soho Eckstein in 2000.”

“The way William melds opera and animation, drawing and language, texture and tapestry have ensured that he is an artist of immense dexterity and enduring complexity. By initiating this project, I have relished the opportunity to work closely with William and Sabine, and share my collection with wide audiences. William’s creative generosity and impeccable attention to detail has been boundless,” Milgrom said.

Of particular note, the exhibition features a major gift to the AGNSW’ collection, I am not me, the horse is not mine (2008), generously gifted by Anita Belgiorno-Nettis AM and Luca Belgiorno-Nettis AM. This eight channel video was commissioned by Carolyn Christov-Bakagriev for the 16th Biennale of Sydney for its first foray to Cockatoo Island.

“Like many others, Anita and I were totally entranced by the aural and visual cacophony of the work, and its tragically absurd political narrative. When William chose the Biennale of Sydney for its launch we were inspired to keep the piece here, and now we are very happy to see the Art Gallery of NSW so excited to have it in their collection,” Luca Belgiorno-Nettis said.

The exhibition also includes a pairing of Kentridge’s nine channel homage to early cinema pioneer, Georges Méliès, titled 7 Fragments for Georges Méliès, Day for Night and Journey to the Moon (2003) with a mammoth collage of the same subject.

Kentridge’s most recent opera project is a production of Alban Berg’s Wozzeck, created for the Salzburg Festival, Opera Australia, Canadian Opera Company and the Metropolitan Opera of New York. Wozzeck will be staged by Opera Australia in January 2019 at the Sydney Opera House, continuing the celebration of Kentridge.

Artistic director of Opera Australia, Lyndon Terracini said, Wozzeck will be an operatic event like no other with William Kentridge’s extraordinary talent creating a world of visual power that illuminates Alban Berg’s masterpiece.

Accompanying the Art Gallery of NSW exhibition is the publication William Kentridge that which we do not remember comprising a conversation between the artist and Cape Town-based writer and playwright Jane Taylor, alongside notes by Taylor and Kentridge on the works on display at the Art Gallery of NSW. The publication will be available exclusively at the Gallery Shop.

William Kentridge: that which we do not remember features a new major gift donated by Anita and Luca Belgiorno-Nettis, and is proudly supported by Naomi Milgrom AO and the Naomi Milgrom Foundation, principal exhibition patron and lender. The Art Gallery of NSW also acknowledges Ruth Faerber, for her gift of Walking man (2000), and Gretel Packer, for the long-term loan of Second-hand reading (2013), both of which make important contributions to the exhibition.