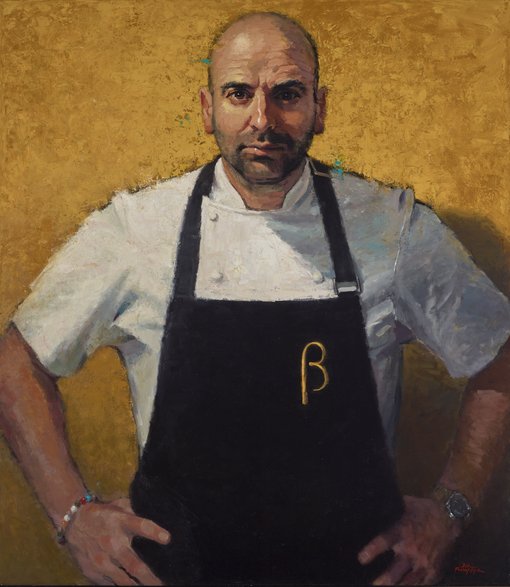 The winning portrait is artist Betina Fauvel-Ogden’s first time entering the Archibald Prize. Being awarded the Packing Room Prize for her debut entry came as a complete shock – and delight.

Fauvel-Ogden paints urban landscapes and occasionally portraits. Last year the artist set her sights on a portrait of Calombaris – despite at that stage never having met him.

“I was always interested in George Calombaris as a subject as I felt there was an intensity to his character,” said Fauvel-Ogden.

“After eight months pursuing him, George gave up his valuable time to allow me three sittings. I wanted to paint him in his chef’s white jacket and black apron. In choosing the pose, George felt most comfortable with his hands on his hips. I kept the lighting simple and focused on capturing the determination in his eyes.

“I had always envisaged a vibrant yellow background for the portrait. When George gave me his cookbook Greek with its bold yellow cover, as a gift at the first sitting, that clinched it,” added Fauvel-Ogden.

The Packing Room Prize – a cash prize of $1500 – is awarded to the best entry in the Archibald Prize as judged by the gallery staff who receive, unpack and hang the entries.

The head of the Art Gallery of New South Wales packing room, Steve Peters, with 51% of the vote, gets the final say. The 2016 Archibald Prize is his 34th and the awarding of the Packing Room Prize his 25th.

Peters said Betina Fauvel-Ogden’s striking work made a strong impression on him on arrival at the Gallery.

“It is a very strong portrait. George Calombaris is looking directly at you. He means business,” Peters said.

“I’m hoping George will cook me a burger next time I am in Melbourne,” Peters added.

The Archibald, Wynne and Sulman Prizes, the Young Archie competition and the Archibald Prize regional tour are all generously sponsored by ANZ. Fred Ohlsson, Group Executive, ANZ Australia was pleased to hear of Fauvel-Ogden’s excitement about been awarded the Packing Room Prize.

“For the past 25 years, the Packing Room Prize has been awarded to some of Australia’s best artists and this year is no different. ANZ is proud of our long history supporting the arts community in New South Wales and we congratulate Betina Fauvel-Ogden on being awarded this year’s Packing Room Prize,” Ohlsson said.

Finalists can be viewed online:

Please see below for the 2016 Archibald Prize Media Kit. 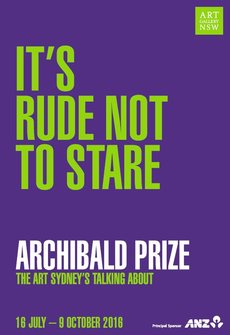