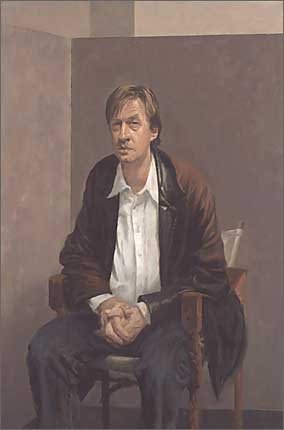 Lewis Miller is a Melbourne-based artist. He won the Archibald Prize in 1998 and is a finalist again this year. He and Rick Amor are friends. Amor painted a portrait of him a couple of years ago. “It was just a tiny portrait but he was such entertaining company while I painted him that I thought I’d like to do a bigger, more extensive portrait of him,” he says.

The portrait was painted over three or four sittings. “He was the most obliging sitter,” says Amor. “He posed well because he knows how it’s done and what the artist needs and he always wore the same clothes. Most people forget to do that.” The limited colour palette was a conscious decision. “It’s something to work against,” says Amor. “It makes you try harder for the harmonies and contrasts. You have to wrestle with the limitations so it’s a real discipline.”

Born in Frankston, Victoria in 1948, Amor studied at the National Gallery Art School. In 1968 he received a National Gallery Travelling Scholarship. He has undertaken residences at the Australia Council Visual Arts and Craft Board studios in Barcelona (1991), New York (1996) and London (2000). In 1999 he was Australia’s official war artist in East Timor. He has worked as a full-time artist from 1972 and has exhibited annually since 1983. His work has been hung in numerous exhibitions including the Archibald, Wynne and Sulman Prizes. He is represented in public and private collections throughout Australia.