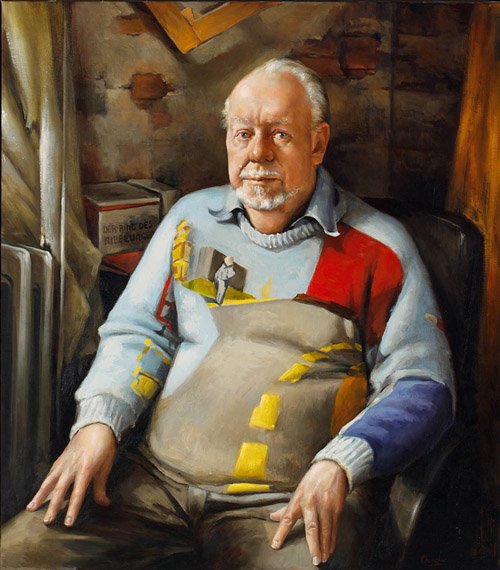 Peter Churcher’s first contact with Jeffrey Smart was a letter he received from the esteemed Australian artist after Smart had seen and liked some of Churcher’s work at the Australian Galleries. They met two or three years ago when Smart, who has lived and worked in Tuscany since 1971, visited Melbourne. Not long afterwards, Smart’s partner Ermes De Zan suggested that Churcher paint the older artist’s portrait. ‘I said, “I’d love to but how would I ever pin him down?”’ recalls Churcher. ‘And they said, “Why not come to Tuscany?”’

So last year, Churcher spent ten days in Smart’s Italian studio painting him from life. He admits it was a bit scary: the master painter and the younger, aspiring artist. ‘As I was setting up he said: “You can’t work there, the light’s no good.” Then he set a mirror up behind me so he could watch my every move. All he said was “knowledge is power”. But it didn’t really bother me,’ says Churcher. ‘It was a lovely time. He had cleared time for me so he wasn’t working. We sat and as I painted he passed a running commentary on my progress and we shared our passion for Wagner: we listened to the Ring Cycle the whole time I was painting.’

The jumper, which features motifs from Smart’s work, was a present from Barry Humphries, who had it knitted as a birthday present. Churcher wasn’t initially over-keen on the idea but when Smart said he wore it all the time in his studio, Churcher acquiesced. His art dealer Stuart Purves later told Churcher that Smart had said he wanted to see what ‘the Churcher boy would do with colour’. ‘So it was a little test and a nice case of the senior artist perhaps knowing what was best for me,’ says Churcher.

Born in Queensland in 1964, Churcher is based in Melbourne. He completed a Bachelor of Music at Melbourne University and a Bachelor of Fine Art at Prahran School of Art and Design. He was Australian’s official war artist in Afghanistan and the Persian Gulf in 2002. In 2004 he was awarded a residency in the Australia Council Barcelona studio. He has been a finalist in the Archibald Prize on five previous occasions and is represented in many major Australian collections including the National Portrait Gallery, the National Gallery of Australia, the Australian War Memorial in Canberra and Parliament House, Victoria.