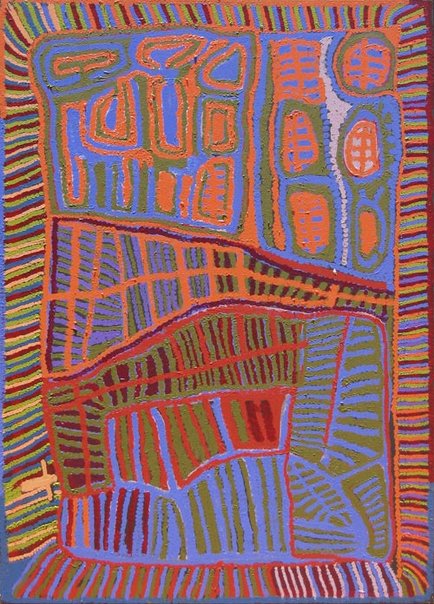 Weaver Jack was born at Lungarung in the Great Sandy Desert, and travelled around her country with her parents until she married. After mining started in the Pilbara, much of the underground creek system was disturbed and there was a devastating drought in Yulparija country. Jack, her husband and children kept travelling in search of water. Eventually, in the 1960s, they settled at Bidayadanga. Jack has lived a traditional lifestyle for most of her life and is considered the senior law woman for the Yulparija people.

Jack explained her self-portrait to Emily Rohr: ‘This is me, this mine, the whole lot is me, this is me. I’ve been walking all around. I know him proper way, he is always here [in her heart], we are same one, my country is me. He long way that way, but he still here.’

‘In many of her works Weaver places a cross,’ says Rohr. ‘At first I thought it was just a signature, but after a while I realised it is a form of self-representation. The mark acted as a trigger, to help me understand that she and her land, Lungarung, are one. Weaver primarily paints her traditional country south of Well 33 on the Canning Stock Route. When she first started to paint, the outlines of the country were laid bare on the canvas like a skeleton. Slowly she reclaimed this country dotting over it, loosely at first. She said these were her people walking all around that country collecting mayi (bush food) and hunting for kuwi (meat). Slowly the country merged with the people. It was then she started putting herself into the paintings. It was through painting that Weaver managed to reclaim her country. We realise this does not fit in with conventional Western ideas of portraiture but portraiture, at its greatest, is about extending our perceptions of who we are and this is Weaver Jack. To understand her you must know her land because they exist together and define each other.’