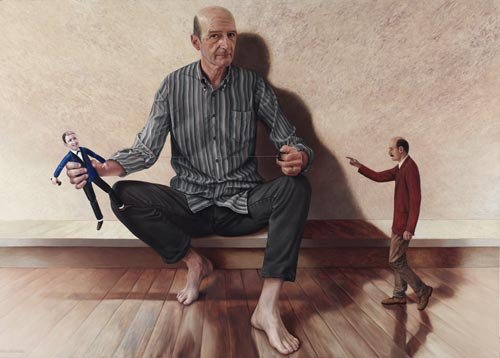 Garry McDonald 'All the world's a stage...'

Paul Jackson’s portrait of ever-popular Garry McDonald represents an actor in full flight and also his battle with depression and involvement with Beyond Blue, the national organisation working to address issues related to depression. Jackson depicts the actor and two of his famous characters: Arthur Beare, from the TV series Mother and son, and Norman Gunston.

‘The shadow is like a physical presence in the painting representing the depression that dogs Garry,’ says Jackson. ‘He has his left ear turned to it as if listening to an inner voice but is in front of it and therefore overcoming it. Garry’s gaze is full of questions, which he shares with the viewer: what is the meaning of life and art and what has he achieved?’ The string that pulls on the Gunston doll is a controlling force which underlines the development of Garry’s characters to the present day and runs through his solar plexus, which is the exact vanishing point for the portrait: an intentional construct.

‘If you look carefully at the Gunston figure you’ll see there are mistakes as if it were manufactured in a country where Garry is little known,’ says Jackson. The parting of the hair is on the wrong side, the jacket is the wrong blue, and the breast pocket on the wrong side also to suggest Gunston’s disruptive nature. Garry is not strangling the doll but holding it and therefore controlling it because it was while playing Gunston that he experienced the onset of depression. The Arthur Beare figure is pointing, questioning the validity of the Gunston character, the validity of acting, and Garry’s inner questioning. Garry sits on a stage, bare feet in contact with the boardwalk, which is a reference to his back-to-nature lifestyle and early involvement with live theatre. He does yoga and gardens, his bare feet showing him as a well-grounded man. Jackson describes McDonald as ‘a painter’s dream. He has such a definite facial structure, almost like a caricature subject to the rigours of an actor’s hard life and he is a very generous sitter.’

Born in Auckland, New Zealand in 1950, Jackson came to Australia in 1976 and lives in Sydney. This is his fifth time as an Archibald finalist.