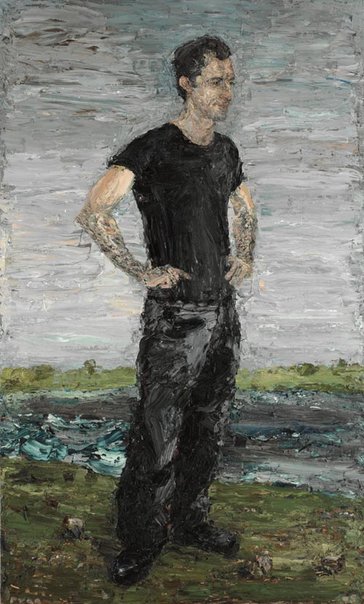 ‘Nicholas has really become synonymous with the Archibald,’ says Ryan. ‘Someone has attempted to paint him for it but a portrait of him has never been hung in the Archibald before.’ Ryan’s title is a reference to Harding’s portrait of artist Bob Dickerson – who lives in Nowra – selected for last year’s Archibald Prize.

Ryan admits he found Harding much harder to paint than Kerrie Lester. ‘She’s such a big personality with amazing hair and eccentric clothing so there was lots to play with. Nicholas always wears black and I found his face much harder to capture than Kerrie’s. His face is really fascinating in that from front-on and in profile he looks like two different people so I went with the profile.’ The painting took Ryan around three weeks, a week of which was spent on the face. ‘When Nicholas talks he is very animated but when he is listening he has this very calm presence about him and occasionally he seems to bite the side of his lip. In the portrait, I tried to capture the way he holds his face when he listens.’

Born in Auckland in 1964, Ryan moved to Australia as a child. He has a Bachelor of Creative Arts from the University of Wollongong, and has had regular solo exhibitions since 1988. He has exhibited in many group shows including the Blake Prize, the Dobell Prize, the Sulman Prize, the Fleurieu Landscape Prize and Art on the Rocks. He won the Northern Exposure Prize and the Mt Kembla Prize in 2004, the Thirroul Art Prize in 2002 and the Faber Castell Drawing Prize in 1987. He has works in both this year’s Wynne and Sulman Prize exhibitions.