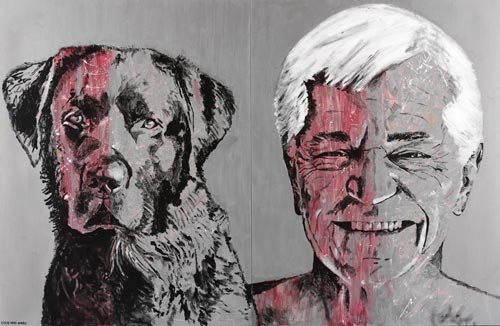 John and his black dog

Husband-and-wife team Gillie and Marc Schattner have been painting together for the last 15 years. They work collaboratively on the same piece, combining their talent to arrive at a single vision.

John Konrads is a sporting legend and business executive. At the age of 15 he broke all the freestyle swimming world records from 200 to 1500 metres. He represented Australia at the 1956, 1960 and 1964 Olympic Games. He is now director of the Cook and Phillip Park aquatic and fitness complex in Sydney.

Gillie met Konrads when she did some design work for the complex. ‘John’s sporting greatness is common knowledge but only recently has he shared his long-term battle with depression,’ she says. ‘We wanted to paint him lying on the ocean, however, during our sitting with John, we discovered that the greatest influence on his life at this time is living with his depression. He told us how Winston Churchill suffered from depression and referred to it as his “black dog” and he explained his involvement with the Black Dog Institute and its foundation. Supported by the NSW Government, the institute addresses mental disorders. After spending more time with John, we realised the depth and complexity to him, shown in every line, crease and mark on his face. John said that the most important thing was that we painted him smiling because he wanted to appear positive. But like Winston Churchill, John always has the black dog of depression by his side.

‘The background of the portrait is quite splattered and random to signify the ups and downs of his bi-polar disorder. The use of metallic silver around the image symbolises a mirror because we wanted the image to reflect the way John sees himself. We have painted the black dog with sadness in his eyes because he wears the face of depression and allows John to wear the face of hope.’

Marc Schattner was born in Melbourne in 1961 and studied graphic design at Swinburne, Melbourne. Gillie Schattner was born in London in 1965 and is a self-taught artist. They have had solo exhibitions in Sydney, New York, Singapore, Hong Kong and Belgium, the most recent of which was Life can’t wait in Sydney Gallery Level, Darling Park in 2005.