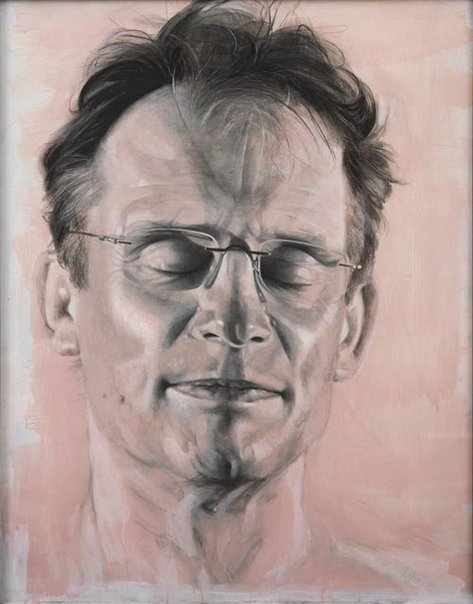 Medium
acrylic and charcoal on paper on board
Read label text

Jim Conway is an accomplished harmonica player whose distinctive style is known to blues, jazz and country music enthusiasts. He was the subject of Greg Weight’s winning portrait at the inaugural Photographic Portrait Prize in 2003.

“I have known of Jim through his music since the 1970s when he was playing with The Captain Matchbox Whoopee Band and later as the virtuoso blues harmonica player in The Backsliders,” says Warburton. “I met Jim at the Art Gallery of New South Wales in 2003, when he was the subject of the winning Photographic Portrait Prize and we had an immediate rapport. He agreed to me doing his portrait and I produced a major work in three panels, which I entered into last year’s Archibald Prize. Unfortunately it wasn’t selected but Jim and I had become good friends and I suggested we give it another go this year. “Jim has multiple sclerosis and he was weary and feeling the heat when I did the initial drawings. He had trouble keeping his eyes open so I went with the flow and this picture was the result. A friend of mine says it’s an affectionate portrayal and I think that’s right. Certainly the better one knows the sitter, the more aspects of the personality are revealed.”

Born in Sydney in 1952, Warburton graduated with an Art Diploma from Hornsby Technical College in 1975 and a Diploma in Painting from the Alexander Mackie College in 1978. He was awarded an Australia Council grant to study in New York and Toronto in 1980. His work has been hung in numerous group exhibitions since 1975 and he has had four solo exhibitions in Sydney. This is his fifth time in the Archibald Prize. He has also been hung twice in the Salon des Refusés. He has had work in the Blake Prize, the Wynne Prize, the Sulman Prize and the Dobell Drawing Prize. He won the Hunter’s Hill Portrait Prize in 2000 and 2001. His work is represented in numerous public and private collections in Australia and overseas.