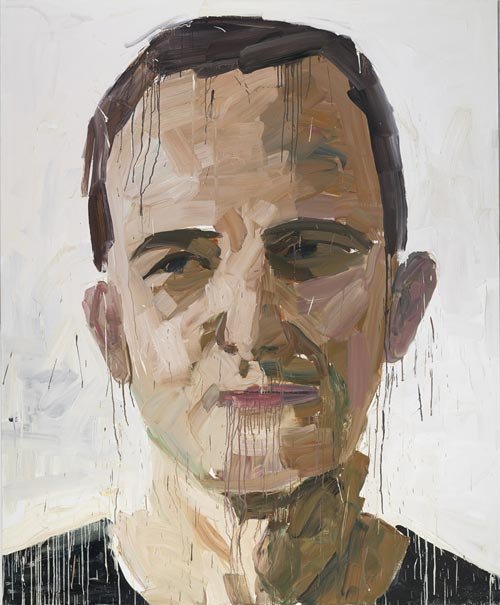 Known for his visceral paintings, thick with swathes and globs of oil, Nicholas Harding won the Archibald Prize in 2001 with a portrait of John Bell as King Lear. Harding has been an Archibald finalist on 13 occasions. His portrait of Bob Dickerson was Highly Commended in 2005 and also won the People’s Choice Award. He has been an Archibald subject before when a portrait of him by Paul Ryan was hung in 2006.
Zhong Chen is a great admirer of Harding’s work and was thrilled to visit his studio for a sitting.
Chen painted one portrait of Harding but after looking at it for a couple of weeks decided to try a second. This time he was really happy with the result. “The brush strokes flowed really naturally and the red and green colours really worked to create the feel of freshness, which is what I wanted to achieve,” he says.
Born in Zhongshan, China in 1969, Chen arrived in Australia in 1989. He has a Diploma of Visual Arts from North Adelaide and a Bachelor of Visual Arts (Honours) from the University of South Australia.
His early paintings explored his cultural heritage. Issues of cultural and trans-cultural identity, belonging and place continue to be themes in his work. Since completing a Masters of Fine Arts from the Chelsea School of Art, London in 1998 he has undertaken a further exploration of traditional Chinese art and regularly incorporates Chinese subject matter into his paintings.
Chen was a finalist in last year’s Archibald Prize with a self-portrait. He was also a finalist in the 2007 Wynne and Sulman Prizes and is represented in the Wynne again this year, as he was in 2006. He has had solo exhibitions in Hong Kong, Singapore, Australia and New York. He has participated in group shows at the Bendigo Art Gallery and the National Gallery of Victoria at Federation Square amongst others. In 2005 he did a three-month Australia Council residency at the International Studio and Curatorial Program in New York.