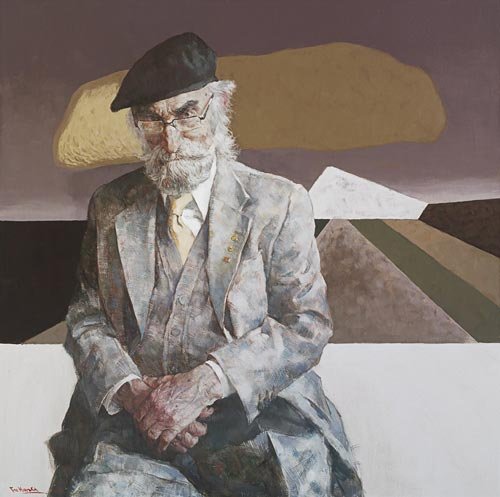 In 2004, in an extraordinary act of benefaction, Dr Joseph Brown AO OBE donated over 150 works from his magnificent collection of Australian art to the National Gallery of Victoria. The Joseph Brown Collection is on permanent display at the Ian Potter Centre, NGV at Federation Square. Over the past 40 years, Brown has generously gifted more than 450 other works of art to Australian public galleries.

Born in Poland in 1918, Brown migrated to Australia in 1933. He trained as an artist but after returning from war service in 1945 became involved in the fashion industry. He went on to become a leading art dealer and consultant as well as an art patron and mentor to artists. He championed the work of new and forgotten artists, was a great advocate for portraiture and built up a superb Australian art collection.

Hong Fu met Brown when he attended the opening of one of his exhibitions last year. “He liked my work and talked to me about painting him,” say Fu. This portrait was subsequently commissioned by the Cbus Foundation for the Cbus Collection of Australian Art.

Fu went to Brown’s house to sketch and photograph his subject. “I liked him straight away,” says Fu. “I had a strong impression of a very special character. In the portrait I focus on the hands and eyes. Although he is 90, he has very strong, sharp eyes – which is why he can find so many beautiful artworks. He knew which were good and which were not. Fu chose a painting by Brown as the background for his portrait, the straight road depicting the long unwavering journey of his lifelong passion for art and the golden cloud above symbolising the spiritual guidance on that journey.

Born in Beijing, China in 1946, Fu has had solo exhibitions around the world including a major show at the China National Art Gallery in Beijing in 1988. In Australia he won the Shirley Hannan National Portrait Award in 2002 and was a finalist in the Doug Moran National Portrait Prize in 1996. This is his first time in the Archibald Prize, although he was represented in the Salon des Refuses in 2000 and 2006.