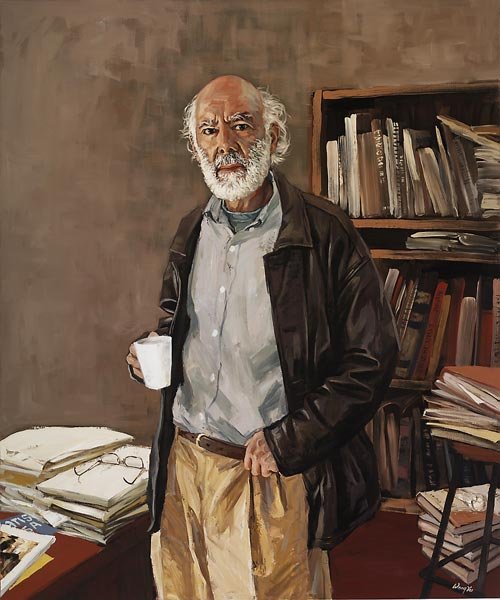 Xu Wang got to know Waterlow when he was studying at COFA. “I had a couple of shows at the college and each time he came and carefully examined my work and we chatted about it,” says Wang. “He is very knowledgeable about art but he is also a very kind person. He gives honest feedback and constructive criticism, which is very helpful. I respect him very much.”
Wang did some sketches of Waterlow at his home then several sittings in his office. The portrait shows him in his office, which is always full of books and papers. “He’s very hard-working and always very busy,” says Wang. “Even when he has lunch he’s always reading.”

Born in China in 1949, Xu Wang is a graduate of the Art Teacher’s course at the Central Institute of Nationalities in Beijing where he trained as a traditional Chinese brush and ink painter. On arrival in Australia in 1989 he undertook further study, principally in oil and now holds a Bachelor of Fine Arts (Honours) and Masters in Fine Art from the College of Fine Arts, University of NSW. Primarily a figurative and landscape artist, he has had solo shows at Barry Stern Galleries in Sydney and Paintbox Fine Art Gallery in Canberra. He was a finalist in the Archibald Prize in 2005 and 2007, the Wynne Prize in 2007 and the Sulman Prize in 2006.