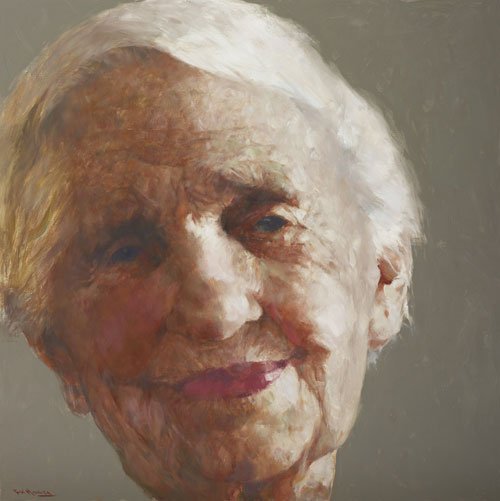 Dame Elisabeth Murdoch turned 100 on 8 February 2009. The widow of Australian newspaper publisher Sir Keith Murdoch and mother of media mogul Rupert Murdoch, she has devoted her life to philanthropy.

Patron of the Murdoch Children’s Research Institute and a life-governor of the Royal Women’s Hospital, Dame Elisabeth was the first woman on the council of trustees of the National Gallery of Victoria and a founding member of the Victorian Tapestry Workshop. She supports over 100 charitable organisations annually, lending her benefaction to a wide range of causes including the arts, medical research, social welfare, flora and fauna and animal welfare.

Hong Fu wanted to paint her, to honour her for her 100th birthday. “She is very popular in Melbourne, where she lives, and in Australia generally,” he says. “Everyone loves her. She has made a very big contribution to the arts in Australia by donating money to galleries for over half a century.”

Fu went to Dame Elisabeth’s home for the sittings where they sat in front of a fire and chatted as he drew her and took photographs. “She was very kind,” he says. “I only wanted to paint her face. Her body is old now but her face is still beautiful so I wanted to paint her lovely, happy face.”

The Murdoch family has previously bought two of Fu’s paintings. After seeing this portrait, the ever-gracious Dame Elisabeth wrote him “a beautiful letter”.

Born in Bejing, China in 1946, Fu has had 40 solo exhibitions in Australia and overseas including a major solo show at the China National Art Gallery in 1998 and a solo exhibition at the Tian Jin National Museum in January 2009. In 2002, he won the Shirley Hannan Portrait Prize. He was a finalist in the Doug Moran National Portrait Prize in 1996 and the Dobell Drawing Prize in 2004. He was also represented in last year’s Archibald Prize.